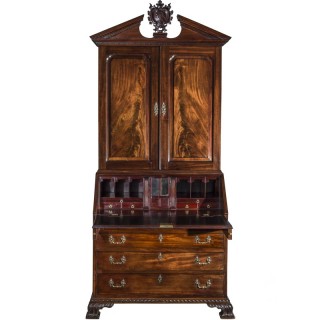 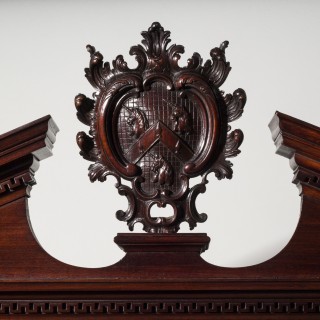 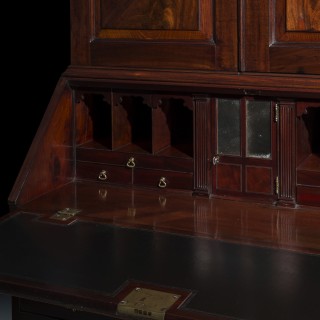 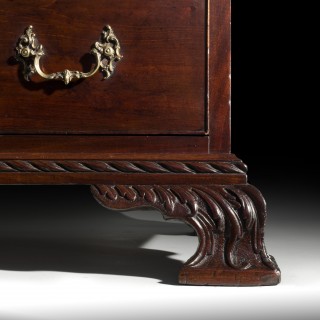 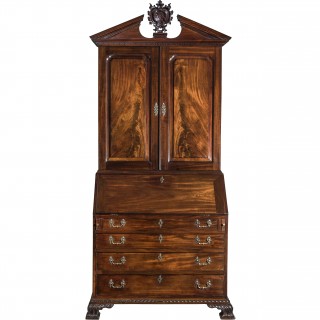 The broken architectural pediment, centred by a finely carved mahogany cartouche containing the coat of arms of the Wrights family of Nottingham, above a conforming Greek key cornice, over a pair of highly figured panelled doors, enclosing three adjustable shelves. The fall front secretaire, opening to a tooled leather-inset writing surface and a fully fitted elaborate interior of pigeon holes above a bank of small drawers, centered by a mirrored door retaining its original plate, flanked by two fluted architectural columns, sliding out to reveal secret drawers. The bureau is fitted with lopers to support the fall front and consists of one short and three long graduated drawers with a later Chippendale rococo brass handles. The whole raised on four ogee-shaped rococo foliage-carved, dovetailed bracket feet, beneath a ribbon-twist carved moulding around the base.

The carving and construction of this bureau bookcase is of outstanding quality, characteristic of work of the best cabinetmakers of the time, such as Giles Grendey, William Hallett, William Vile and Thomas Chippendale. A clothes press bearing the Giles Grendey (1693-1780) label, illustrated in ‘The Pictorial Dictionary of Marked London Furniture 1700-1840’, by Christopher Gilbert, p. 433 has an identical cornice, and moulded bracket feet.

The bookcase, severely architectural in its form and details, is reflective of the Palladian taste promoted by William Kent and prevailing in Britain from the 1730s and the following decades. The cresting’s swagged armorial cartouche bears a close resemblance to a door-case ‘exactly after the established rules of Palladio’ in Isaac Ware’s A Complete Body of Architecture (1756) (reproduced in F. Lenygon, Decoration in England, London, 1914, fg. 100).

The superbly carved cartouche, centering the architectural top of the present bookcase, displays the Wrights family coat of arms: ‘Sable on a chevron between three unicorns’ heads Or as many spearheads Gules’. The unicorn was a famous device all over Europe, and symbolised the virtue of the mind and the strength of the body. It is well known as a supporter of the Royal Arms of England, a position it has occupied since the accession of James VI of Scotland to the English throne as James I.

The Wright family of Nottingham bankers made their fortune from iron and coal production. Ichabod Wright (1700-1777), had been a merchant and ironmonger who found the Wrights Bank in 1761. The family’s history can be traced back to 1557, when his great-grandfather, John Wright, of Stowmarket, Suffolk, made his will. His first son, Ichabod’s grandfather, was Captain John Wright, who suffered eight years’ imprisonment in Newark Castle for his attachment to the Parliamentary cause. He afterwards acquired property in Nottinghamshire and Suffolk (see L. Jacks, The Great Houses of Nottinghamshire and the County Families, 1881).

The Wright family had been extensively engaged in the Baltic trade at premises in Long Row, where they were large importers dealing in iron, timber, and other commodities derived from abroad. Having at that time a widespread connection with Manchester, Stockport, Hull, Sheffield, and other of the principal trading and industrial centres of Lancashire, Yorkshire, and the Midlands generally, the firm were then in the habit of discounting the bills of merchants and manufacturers and supplying them with gold, and as this department of the business gradually assumed a greater importance the original trade was finally relinquished in 1761, and banking was established in its place. (see Industries and Manufactures Illustrated and Reviewed, Robinson, Son & Co., 1898).

The head of the firm was Thomas Wright (b. 1724-1790) of Mapperley Hall, who possibly had commissioned the present bookcase.