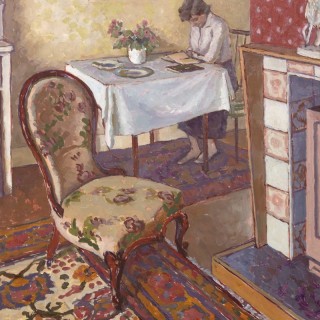 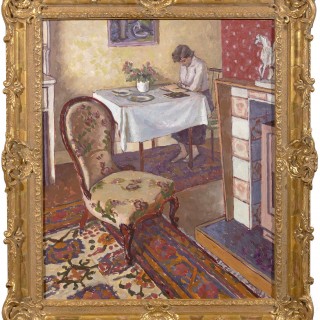 'Interior with the Artist's Wife' by Philip John Whitten (born 1922)

Not much is recorded of Whitten’s life other than he was an artist, educator and latterly a potter of some renown. He was born in Leyton, Essex and studied at Hornsey School of Art from 1937 to 1940, under Norman Janes and John Charles Moody. He went on to Accrington School of Art from 1941 to 1942 then to the Royal College of Art from 1946 to 1949 under Carel Weight, Edward Bawden and Ruskin Spear. He taught at Eastbourne School of Art, in Sussex, where he lived and was a member of the Society of Artists. He seems to have been a friend of Duncan Grant as the latter wrote an open letter praising Whitten as a man and a teacher. He exhibited in London but principally in Eastbourne, where he had a show at the Towner Art Gallery. In later years he experimented with Pottery and Ceramic sculpture.

'Interior with the Artist's Wife' by Philip John Whitten (born 1922)