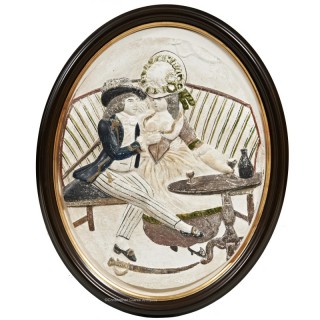 A bawdy oval, painted plaster plaque entitled to the bottom Safe In Port.

The plague shows a sailor sat on a sofa with his hand up to the bosom of a doxy, offering him the comforts of home that he has missed whilst at sea. His cutlass is on the floor and they are drinking with a tripod table to the front with a bottle and 2 glasses.

The plaster is highlighted with paint to show the blue jacket and stripes to the sailor’s trousers and green to the prostitute’s hat and sofa.

The returning sailor theme was quite common at the turn of 1800 and this plaster cast is taken from a mezzotint entitled Jack Got Safe Into Port With His Prize, dated 22nd November 1780. A copy of the print is held by the National Maritime Museum. At some stage this cast has been reduced in size, perhaps after damage and some of the missing letters from the full title can be seen. The plaster cast is in a modern frame. Early 19th Century.

Frame size is given.