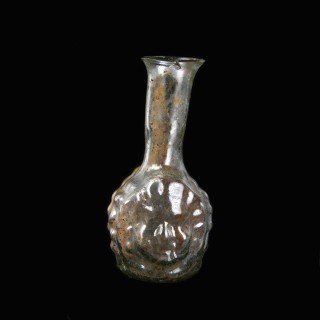 A very fine example of Ancient Roman glass flask, mould-blown in a clear aqua colour. The passing of time has left some delicate translucent rainbow-like iridescence to the glass’s surface. The glass features a round body resembling two identical plump-faced heads with dimpled chins and curly hair, represented by raised blobs, a long cylindrical neck and a flaring rim. The flask has been blown in a two-part mould: traces of the joining can be seen at the mid-way point, vertically, between the two faces. The double-faced figure can be identified with Roman god Janus. According to Graeco-Roman mythology and culture, Janus was one of the oldest and most important divinities. He was the god of beginnings, and usually depicted with two faces, in order to look towards both the future and the past.
Date: Circa 3rd Century AD

From an important collection of a Japanese gentleman, deceased, 1970-2015.

Extremely fine, a small chip off outside rim.