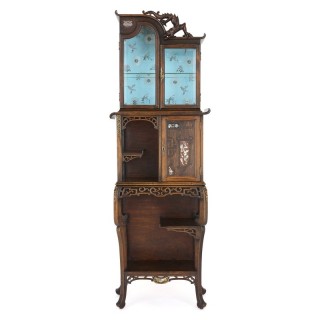 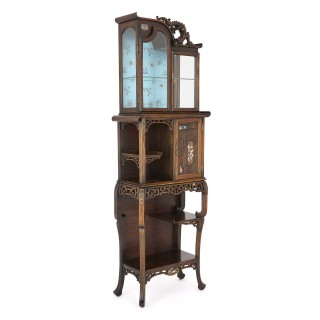 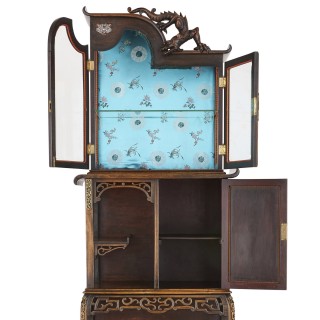 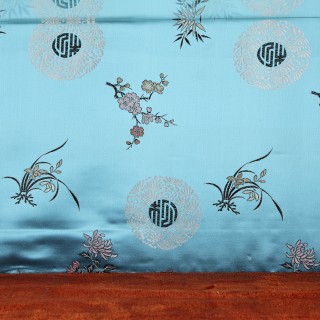 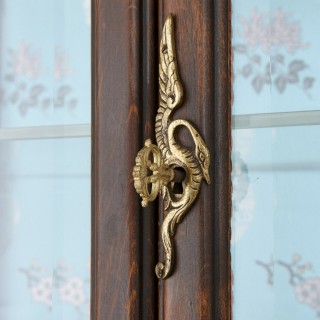 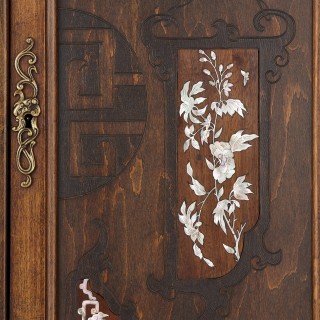 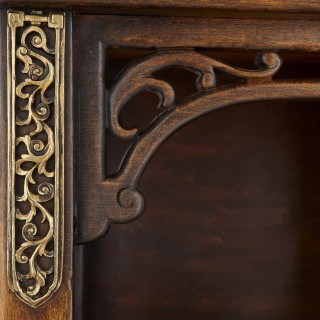 This wonderful display cabinet is designed in a ‘Japonisme’ (Japanese) style, which was popular in Europe in the mid-late 19th Century. This craze was kick-started by Japan reopening to trade with the West, and exporting Japanese goods—including furniture and decorative art—to Europe. One craftsmen by the name of Gabriel Viardot (1830-1906) established a name for himself in France producing Chinese and Japanese style furniture. Created in France in the late 19th-Century, this cabinet is clearly inspired by Viardot’s work.

Designed on three levels, this hardwood cabinet is composed of a glazed display cabinet top, a middle split into an open and closed compartment, and an open lower tier. The L-shaped upper level features a shaped roof, which flicks upwards at either end and is topped by a wooden sculpture of a dragon. The top left corner is decorated with a mother-of-pearl inlaid geometric design. The cabinet’s interior is lined with a bright blue fabric, decorated with geometric and floral motifs. It is contained behind bevelled glass doors, with a crane-shaped gilt metal lock. The second tier is composed of an open left-hand compartment, with a half-length shelf, which is edged with stylised vegetal fretwork designs and mounted with openwork gilt metal panels. The right side features a storage space, contained behind a lockable door, inlaid with mother-of-pearl floral motifs. The lower section is entirely open, with a half length shelf on its right side. It is ornamented with scrolling fretwork panels, and foliate openwork gilt metal mounts. The cabinet stands on four legs, which flare outwards slightly and terminate in shaped feet.