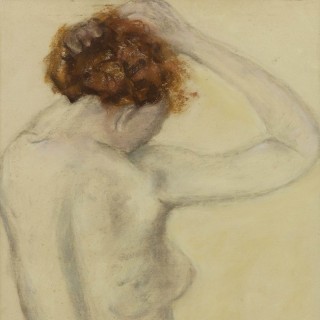 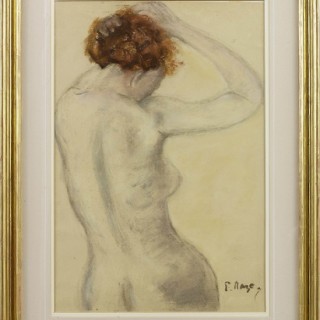 Paul Maze fell in love with Jessie Lawrie in the early 1930s, she became the second Mrs Maze in 1950 and the couple remained devoted to each other until Paul’s death in 1979. He painted and drew Jessie constantly, almost to the exclusion of anyone else in their later years. It was his great friend and mentor Édouard Vuillard who convinced Paul Maze to adopt Pastel as his principal medium. He introduced the young Maze to his pastel maker the great Dr Roche, who had discovered a new formula for chalks that had allowed for 1,600 shades. Later Maze had described the experience as having been “taken by God to meet God”. The medium was perhaps put to best use in his loving studies of Jessie. His simple glimpses of domestic moments are reminiscent of the later intimiste works of Bonnard and Vuillard finding beauty in the otherwise mundane. This intimacy found in his small pastels of Jessie, say much for his feelings for her. They are the most natural of all his subjects as, one would guess after years of living under the artists eye, Jessie appears oblivious to the viewer and artist as she carries on with her daily routine, bathing and dressing un-posed and undirected.