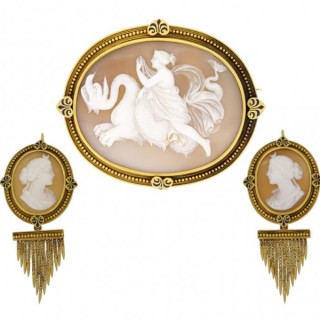 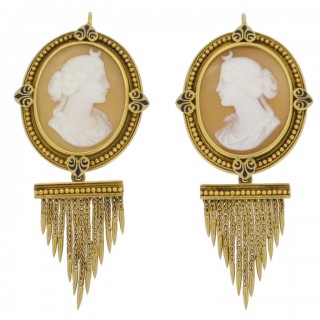 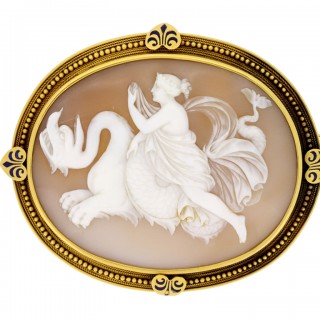 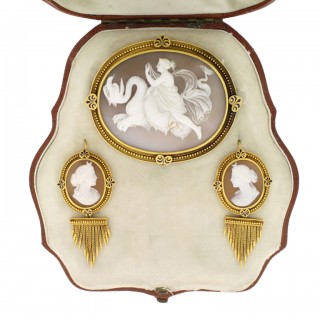 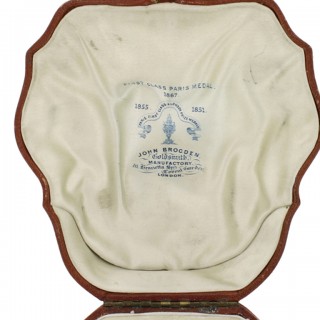 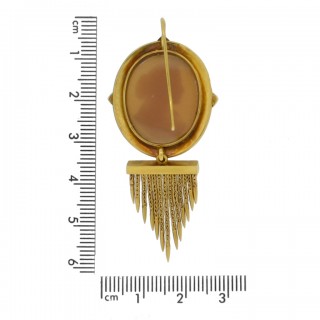 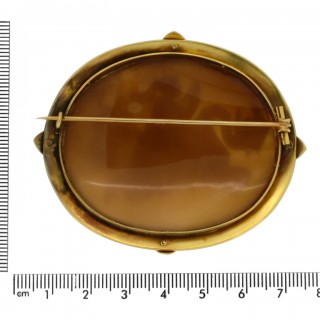 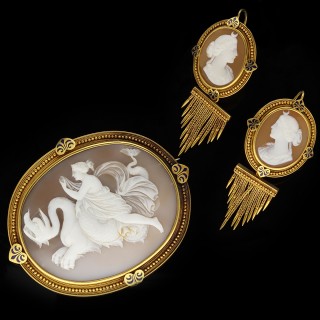 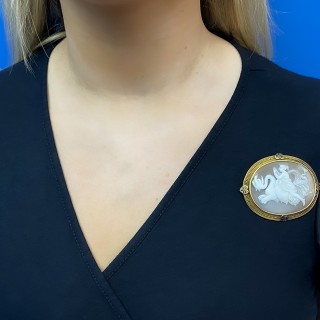 Antique shell cameo brooch and earrings by John Brogden, English, circa 1870. A yellow gold suite of jewellery, the brooch composed of a horizontally situated oval Bull’s Mouth shell cameo of the Greek goddess Selene riding a serpentine dragon in a rubover collet setting, encircled by a conforming frame of gold beading and twisted gold wire punctuated with four gold palmette form plaques engraved and decorated with dark blue enamel and placed at the cardinal points, the reverse mounted with a hinged pin and scroll clasp, the earrings each composed of a vertical oval Bull’s Mouth shell cameo engraved with a bust length portrait of Selene with crescent-set headdress, encircled by a conforming frame matching that of the brooch with the addition of a pendant decoration composed of a horizontal bar of gold beading and twisted gold wires suspending gold link chains graduated from centre and ending in conical gold elements, the reverses mounted with French wire fittings, all in a fitted red leather case, the interior marked ‘FIRST CLASS PARIS MEDAL/ 1855.1867.1851/ PARIS FIRST CLASS & LONDON PRIZE MEDALS/ JOHN BROGDON/ Goldsmith/ MANUFACTORY/ 16, Henrietta St. Covent Garden/ London’.

The cameo—defined as a gem, usually either a mineral or a shell, upon which a design has been carved in relief—is believed to have originated in Hellenistic Greece, during the third century BC. These miniature sculptures, at that time confined to the medium of hardstone, are thought to have been made with the primary purpose of personal adornment. The same practice of mounting cameos in jewellery was then continued by the Ancient Romans, and they are known to have been worn by many a Roman emperor.

After the fall of Rome the fashion for cameos went into a decline, until it was again revived during the Renaissance period, brought about by a keen interest in the ancient world. At this time both antique and contemporary cameos were mounted in jewellery, as well as collected as objet d’art. The art of cameo cutting was revived in Italy, where it would remain a centre for the coming centuries. Again there was a lull in interest in carved gemstones, until the Neoclassical revival of the eighteenth century, largely stimulated by the discoveries of the ancient Roman cities of Pompeii and Herculaneum. As with the Renaissance, antique specimens were generally prized over modern cameos, and the worldliest men in Europe held them among their collections of art and antiques. That said, carving centres in Rome and Torre del Greco (near Naples) in Italy were established in response to the demand of the Grand Tourists, who travelled to Italy and Greece to become educated in the wonders of the ancient world. It was at this time that shell cameos, mostly made in Torre del Greco due to its proximity to the sea, became more popular, owing to the relative ease in carving shell over hardstone. In addition to Rome, hardstone cameos also became a specialty of Idar Oberstein, Germany, which had a long history with both the gem mining and cutting trade.

In a shift away from the collector’s cases of the previous century, the nineteenth century saw a strengthening in the fashion for wearable cameos. After the Empress Josephine donned a cameo-set suite of jewellery at the coronation of Napoleon in 1804, cameo jewellery became all the rage. Napoleon played a further hand in promoting the art by establishing a gemstone carving school in Paris, inspired by his appreciation for the arts of the ancient world. By the mid-nineteenth century shell cameos, in part due to their lightness compared with hardstone cameos, were the height of fashion. Large shell cameos as well as hardstone cameos were set into contemporary mounts, often as suites of jewellery. Some of the best cameos of the nineteenth century—carved by a select group of recognized carvers—were set into revivalist mounts, corresponding to the subject matter.

In Victorian England cameo jewellery was particularly prized, due in part to the fact that the Queen owned and wore a number of cameo jewels. One example which can often be seen in official portraits is the Badge of the Order of Victoria and Albert, carved by Tommaso Saulini of Rome, who also produced cameos for the maker of the present suite, John Brogden. To meet demand some carvers set themselves up in London, including William Schmidt, a German carver from Idar Oberstein, who produced cameos for top London jewellers, including Brogden, Carlo Giuliano and Child & Child. In fact, Schmidt purports to have been the first to carve cameos out of opal, which Brogden reportedly displayed in the Paris Exhibition of 1878. An extant example, now in the collection of the British Museum, was set by the Giuliano firm.

Regarding subject matter, cameos throughout time have been largely figural, from bust length profile portraits to scenes with multiple full-length figures, and sometimes animals. Ancient Greek and Roman cameos often depicted mythological scenes as well as contemporary figures. During the Renaissance, mythological scenes were popular, often taken directly from ancient sculpture, as well as portraits of notable contemporary figures. During the eighteenth and nineteenth centuries, due to the revivalist styles, both Renaissance and Classical subjects were copied and set into matching (and sometimes unmatching) revivalist mounts. From the Renaissance through the Victorian era, being able to recognize the source of the carving in a cameo was a mark of erudition, revealing in the wearer knowledge of Classical art.

As mentioned, the present cameo parure was made by one of the top purveyors of Victorian cameos of the nineteenth century, John Brogden. He first apprenticed for a London watch and clockmaker with a workshop at Bridgewater Square, where he became a partner with James William Garland in 1831. He was then a partner at the firm of Watherston and Brogden, a goldsmithing firm located at 16 Henrietta Street in Convent Garden, fully taking control of the business in 1864—the premise he held when this suite was made. Brogden created jewels in various revivalist styles, most notably the Renaissance and Archaeological revival modes, the latter much inspired by the work of the famed Italian jeweller Castellani. Brodgen exhibited in the 1851 Great Exhibition in London, the 1855 Paris Exposition, and won a gold medal for his jewellery at the 1867 Paris Exposition.

John Brogden was one of the premier dealers in cameo jewellery in London, setting both hardstone and shell cameos made by the best carvers in Italy. He was also a collector of antique cameos, at times lending pieces from his important collection to the South Kensington Museum (today the Victoria & Albert Museum). Furthermore, his wife was an Italian scholar on the subject, one of her accomplishments being that she translated Augusto Castellani’s Gems: Notes and Extracts. A number of cameo-set jewels made by Brogden are part of important museum collections, including the Victoria & Albert Museum, the British Museum and the Birmingham Museum.

The mounts in this parure are in the Greek revival style, indicated by the use of palmette plaques, an ancient Greek design element. The use of twisted wire, gold beading and fringe elements were typical of a more generalized Archeological revival style popular during the third quarter of the nineteenth century. The subject of the cameos themselves is also classical, depicting Selene, the Greco-Roman goddess of the moon, shown full-length riding a serpentine dragon in the brooch, and in profile wearing her crescent moon headdress in the earrings. The cameos themselves are unsigned, as was common with shell cameos. However, Brogden very often set cameos by the famed carver Tommaso Saulini, and then after his death in 1864, his son Luigi, who are known to have worked in both shell and in hardstone. Thus it is quite possible that the cameos in the present set were made by Luigi Saulini (son rather than father, based on the fact that the marks on the case date the piece to after the 1867 Exhibition). There is a very fine hardstone Saulini cameo set in a Greek revival mount by Brogden in the British Museum.

Charlotte Gere and Judy Rudoe, Jewellery in the Age of Queen Victoria: A Mirror to the World, London: British Museum Press, 2010.