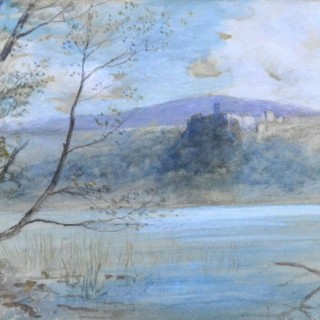 Signed with initials; signed and variously inscribed on labels on the backboard
Watercolour and bodycolour

MacWhirter was born in Edinburgh where he studied at the Trustees Academy under Robert Scott Lauder and John Ballantyne. He spent long periods sketching and studying outdoors and exhibited his first picture at the Royal Scottish Academy when aged only 14. He was elected an associate member of the Royal Scottish Academy in 1867 and shortly after moved to London where he established a reputation as a fine landscape artist. He travelled widely in Europe and America, the Alps being a great inspiration. He exhibited at the Royal Academy, Grosvenor Gallery and elsewhere. Works by MacWhirter are in many public collections.

Lake Nemi is a small circular volcanic lake in the Lazio region of Italy, about 20 miles south of Rome. The small town of Nemi is shown set on the hills on the opposite bank. Turner’s 1840 watercolour of Lake Nemi is in the collection of the British Museum.