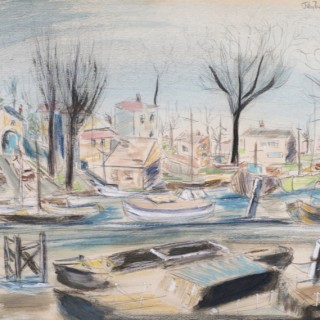 Signed and dated ‘52; bears title and the artist’s address on the label attached to the backboard
Watercolour and bodycolour over pencil

He studied at Repton and the Slade School of Fine Art. He exhibited at the Royal Academy, Leicester Galleries, Royal Society of British Artists and Paris Salon and held one man shows at the Redfern Gallery, Leger Gallery and Walkers Galleries. Works by him are in the collections of Trinity College, Oxford, Manchester City Art Gallery and Kirkcaldy Museum and Art Gallery.

As a director he is best known for his long associate with the television and film adaptations of Leslie Charteris’ novels chronicling the adventures of his charming hero Simon Templar, alias “The Saint”. He also directed many British comedies including many of Norman Wisdom’s films.

He lived in Chiswick and later at Kingston Hill, Surrey.