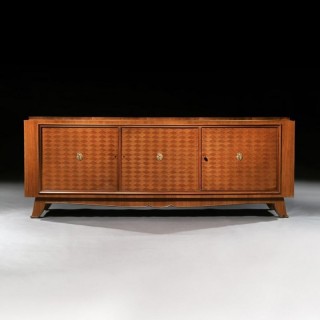 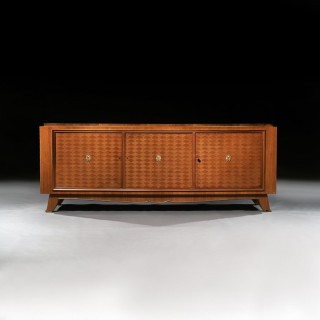 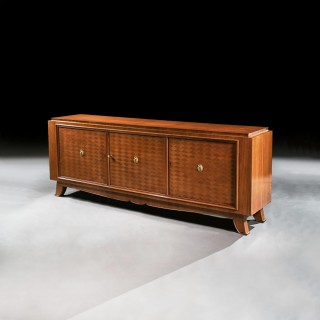 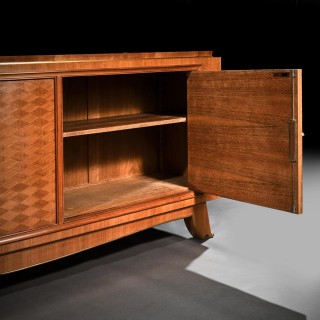 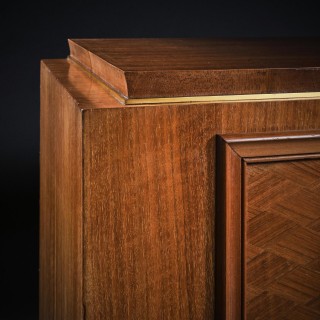 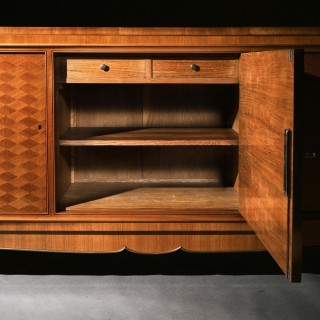 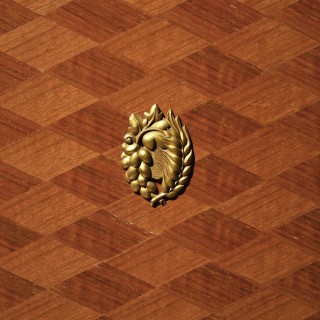 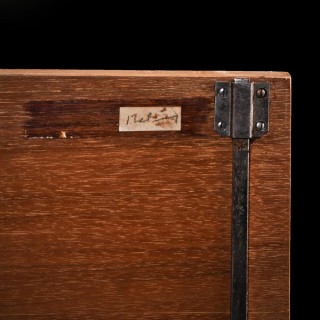 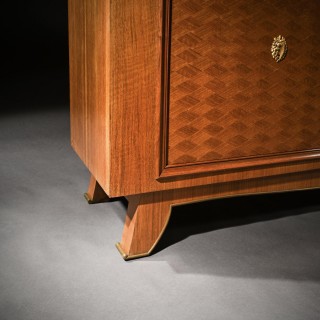 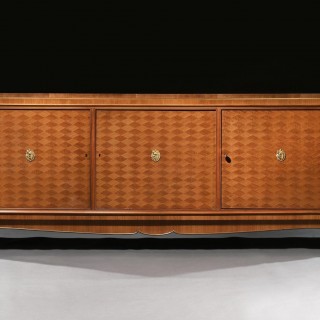 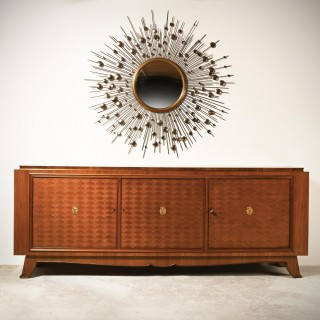 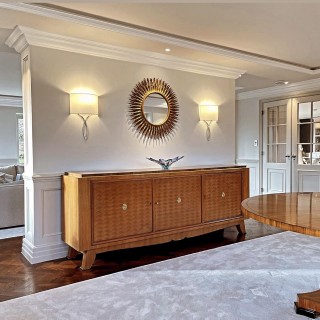 Extremely well constructed, as one would expect, from solid oak, veneered in European straight grain walnut having a stepped top outlined by a subtle bronze trim, the three doors adorned with lozenge geometric walnut parquetry, gilt-bronze naturalistic mounts and retaining the original bronze key.
Each door opens revealing an interior with an adjustable highly figured walnut shelf with its edge veneered in walnut, the central door also revealing two fully fitted walnut drawers with brass knobs. The right-hand door bearing the original ivorine plaque signed by Jules Leleu himself.
With conforming gilt-bronze trim to the apron with a small central scallop, the entire piece resting on sabre legs terminating in gilt-bronze feet.

In excellent condition having gained a wonderful colour, an extremely rare piece signed by one of the key designers in starting off the Art Deco movement, Jules Leleu.

About Jules Leleu
This piece has particularly impressive provenance as it is signed by its designer, Jules Leleu who was of the one key authors of the Art Deco movement. His family firm of Maison Leleu had existed since the eighteenth-century and he helped to guide it through much of the twentieth century.
Leleu exhibited at the prestigious 1925 Exposition des Arts Decoratifs, winning a Grand Prize there and one of his pieces was purchased by the Metropolitan Museum in New York* (Acc.No. 46.93). He was also an active participant in the annual Salon D’Automne and Salon des Artistes Décorateurs.
Leleu was a prolific ensemblier, with a large number of private and public clients including the French ocean liners, Ile-de-France, Atlantique, Normandie and France. Amongst other important commissions were a dining room for the Élysée Palace, and the Grand Salon des Ambassadeurs at La Societé des Nations in Geneva, named the Salon Leleu, which is still in existence today. His pieces are highly prized and can be seen at the Metropolitan Museum in New York, the Musée les Arts Décoratifs, and Collection Mobilier National in Paris which holds over one hundred of his pieces.

Leleu is celebrated for his conception of refined furniture forms and precision craftsmanship. His furniture is generally spare and sleek. He made significant use of opulent materials that were a keynote of haute Art Deco design and favoured the use of woods with warm tones, such as amboyna, Macassar ebony, and as on this piece, walnut, all of which imparted richness and elegance. He had his own distinctive and sophisticated style, often sober and reflective of traditional French furniture design, but also modern in line and use of materials, and always in excellent taste.
This beautiful haute Art Deco piece would make a stunning statement piece in any contemporary home.

In excellent condition having gained a wonderful colour, an extremely rare piece signed by one of the key designers in starting off the Art Deco movement, Jules Leleu.