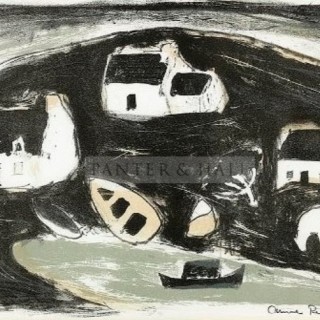 Born in Galashiels in 1895, Redpath was brought up in Hawick and later studied at Edinburgh College of Art under Robert Burns and Henry Lintott. Redpath showed her exceptional talent as an artist at a young age and in 1919 she won a travelling scholarship, enabling her to travel throughout Europe before returning to the Borders. Redpath is often considered the pivotal figure in the group of painters now referred to as The Edinburgh School.

After a lengthy spell in the south of France, Redpath returned to Hawick in the mid-1930s. Her brilliant manipulation of paint, left in delicious peaks or eked across a rough surface with a palette knife, is characteristic of her oeuvre.

Redpath had considerable commercial success in her lifetime enjoying a fruitful, consistent relationship with Aitken & Dott in Edinburgh and latterly with Reid & Lefevre in London. Since her death, Redpath’s reputation has been further enhanced with retrospective and centenary exhibitions and she is now firmly established as one of the most celebrated figures in 20th Century Scottish Painting.

Purchased in the Scottish trade