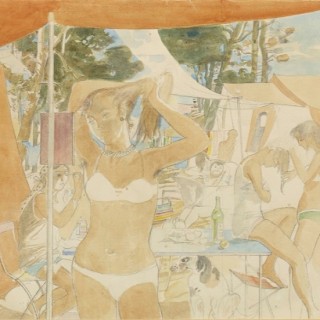 Ward was born in Hereford, where his father, Russell Stanton Ward, ran an antiques shop and restored paintings. He was the youngest in a family of seven children, living in a flat above the shop. His father died when he was young. He was educated at St Owen’s School in Hereford, and then from 1932 to 1936 at the small Hereford School of Arts and Crafts. With financial support from the Principal, Sir William Rothenstein, he won a place at the Royal College of Art in London in 1936, where he studied under Gilbert Spencer, Barnett Freedman, Percy Horton, Charles Mahoney and Alan Sorrell, winning the prize for drawing.

He served in the Royal Engineers in the Second World War from 1939, and used his drawing skills to design pillboxes in Kent. He was posted to Belgium after the war, where he met his future wife Alison Williams in Ghent. He was demobbed in 1946, and returned to the Royal