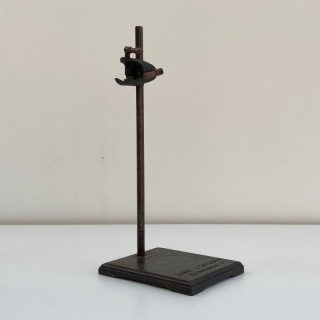 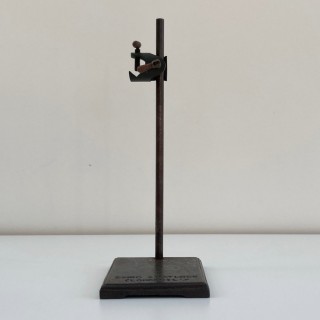 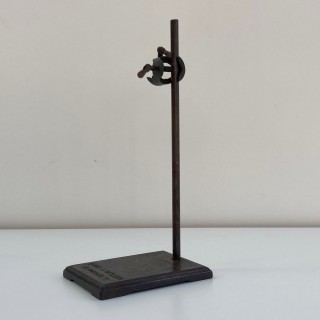 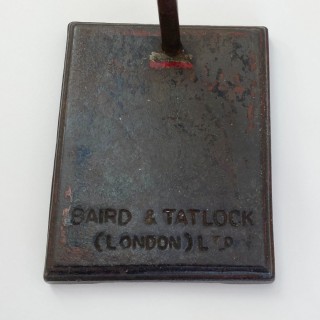 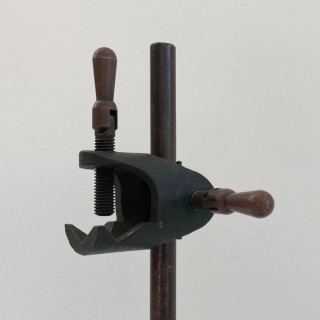 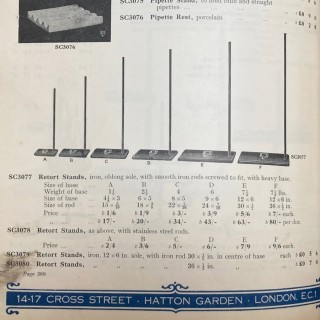 Comprised of an iron weighted rectangular base with the company name of Baird & Tatlock (London) Ltd emblazoned in large letters. An iron rod extends from the base onto which a double clamp is fitted. The clamp has two jaws, one of which is secured to the stand by means of a brass screw and which may be adjusted for height. The other extends out beyond the base to allow for additional arms to be secured for holding laboratory glassware.

The firm of Baird & Tatlock was founded in Glasgow in 1881 by Hugh Harper Baird and John Tatlock. Both men seemed to have trained in laboratory equipment production but notably Tatlock had previously been the private assistant of Professor William Thompson (later Lord Kelvin). Initially situated at 100 Sauciehall Street in Glasgow, the company profited from the huge surge in popularity of scientific teaching in Victorian Britain and specialised in laboratory furnishing for schools and research establishments.

By the end of the decade, they had moved to larger premises in Renfrew Street and further premises were opened in London. The latter occasion marked the departure of Hugh Harper Baird to the capital in order to manage the company’s interests there. During the 1890’s the company attained contracts for numerous Governmental organisations including the Admiralty, the War Office, The General Post Office and various Colonial Departments but by 1896 the pair agreed to dissolve the partnership, leaving Baird in sole ownership of the London business which became Baird & Tatlock (London) Limited and Tatlock retaining the concerns in Glasgow. A year later, Tatlock opened further premises in Edinburgh, in 1904 he extended the Glasgow firms reach to Liverpool and a further branch was opened in Manchester in 1911. By this point, both original partners had died (Tatlock in 1909 and Baird in 1911) and the latter occasion perhaps prompted the move by the Glasgow company to register itself under the name of Baird & Tatlock Limited, a move which ensued in legal action from the London Company.

The legal action was however unsuccessful and the confusion was only resolved in 1925 when the Scottish company was merged with John J Griffin & Sons Ltd whereafter it was renamed as Griffin & Tatlock. A further merger with W&J George & Becker in 1954 saw a final name change to Griffin & George and under this guise, the company continued to trade in scientific apparatus until 1999 when it finally shut its doors.