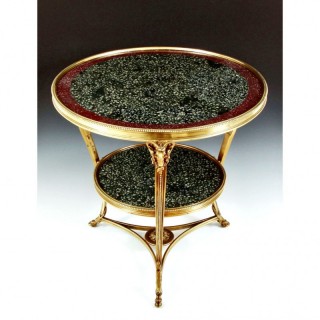 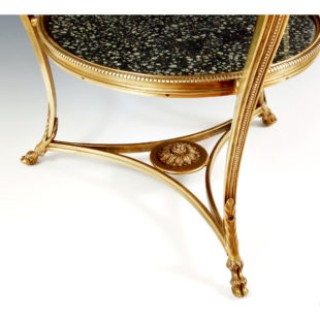 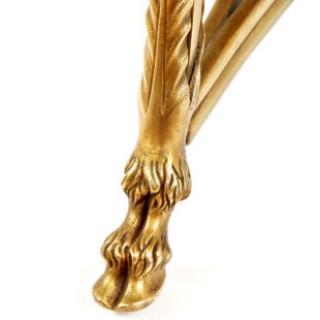 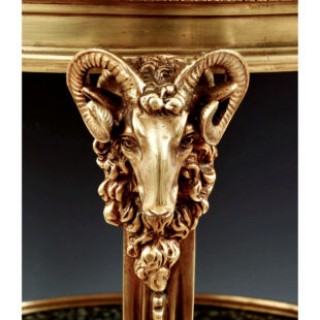 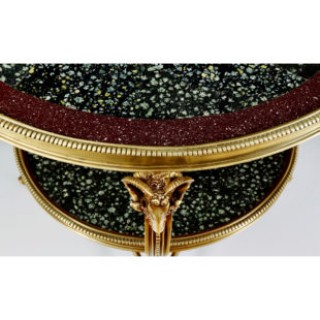 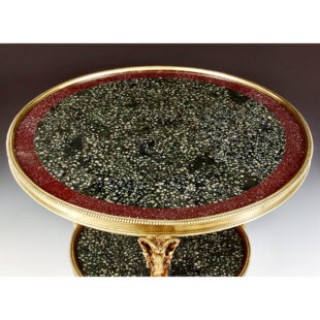 Important and rare late 19th century Lapis Spartanus Grecian Porphyry & Imperial Egyptian Porphyry centre table. The rarity of the stone set within this fabulous table cannot be overstated. The deepest green groundmass filled with the most incredible yellow green and creamy white snowflake star shaped phenocrysts of plagioclase Feldspar create the most dramatic of appearances. The characteristics of this superlatively figured example are the rarest you could ever find. The Roman Lawyer & most respected collector of ancient decorative stones used by the Romans, Avvocato Faustino Corsi ( 1771-1846 ), noted that Porfido Verde Antico, of which this stunning piece incorporates, is the rarest of varieties & ”was only ever found in rather small pieces”. The incredibly rare & ancient geological specimen held within the upper & lower plateau within this table has been veneered to form two large surfaces, with the upper part crossbanded in Imperial Egyptian Porphyry. The top of each monopedic leg has a delightfully cast Rams’ head to further enhance the Roman feel. The main & most important stone comes from the Levetsovo or Krokees area in the Laconia region in Greece. The form of this wonderful table highlights the true beauty of Greco Roman design to its fullest.

The extraordinary variety of Porphyry that is the main stone in this masterpiece comes from the ancient area that was Sparta. There are a few carvings of this stone that date to the Minoan & Mycenaean civilizations, but the later Greeks did not use it. It was the Romans, in the first Century CE, who adopted & used this truly fabulous stone with great relish. Authors from ancient times have referred to it under various names, such as ”Lapis Laxedaemonius”, after the ancient name for Laconia; ”Lapis Taygetas” from the name of the mountain range where it would have been quarried; ”Lapis Croceus” after the nearby town of Croceae, now called Krokeai or Krokees, and ”Lapis Spartanus” because Krokeai was located very near the city of Sparta.

The Red Imperial Porphyry, or Lapis Porphyrites, was quarried by ancient Romans at Mons Porphyrites, part of the modern Gebel Dokhan in Egypt, following its discovery in the age of Emperor Tiberius (14-37 AD). Due to the exceptional quality of its surface and its rarity Porphyry was employed only for the grandest and most important commissions, from temples such as the Pantheon to monuments such as the portrayal of the Four Tetrarchs, now in Venice, and the sarcophagi of Emperor Constantine’s Family. Porphyry was forbidden to be used in works of art by the lexpurpurea, an ancient Roman law that forbade its use by anyone but the Imperial Family.

Excavations at Mons Porphyrites had ceased by the early 5th century AD and, whilst Porphyry continued to be the prerogative of rulers throughout late antiquity. Because of its almost indestructible nature it was also used to signify immortality; in the Vatican, Saint Helen and Saint Constantia, both lie in Porphyry sarcophagi. In 786 Charlemagne was granted permission by Pope Hadrian I to take Porphyry columns from Rome for his cathedral in Aachen. The stone’s true rediscovery took place in Renaissance Italy where in the 16th century the Medici were granted entitlement and the invention of new cutting tools lead to its increasing use.

Following in Charlemagne’s footsteps, sculptors and architects thus reused and cut their works from ancient Roman columns, or the occasional slab found intact since imperial times. This practice continued into the following centuries, as the Egyptian quarry lay dormant until its identification at the beginning of the 19th century. At the end of the eighteenth century deposits appeared in Sweden and Russia whose colour and texture were different to the Porphyry in Egypt. It was thanks to a donation from the Tsar of Russia, that the Emperor’s tomb at Les Invalides was built. It goes without saying that any item incorporating Egyptian Porphyry is highly sought after.