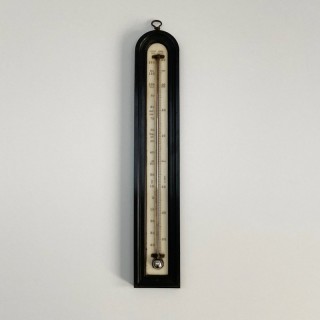 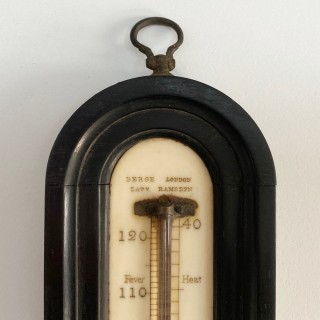 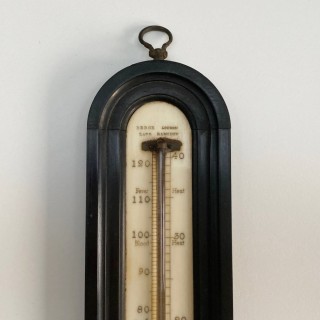 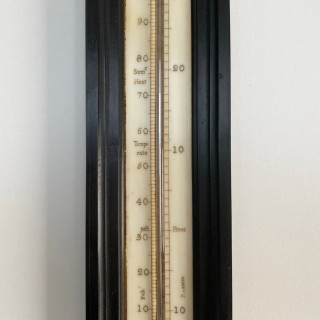 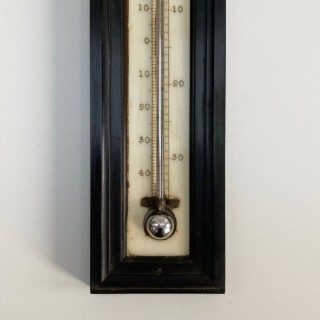 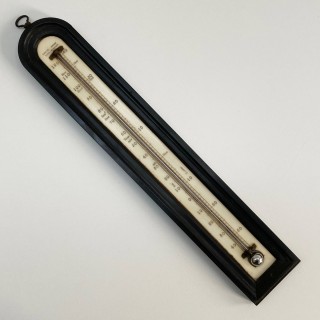 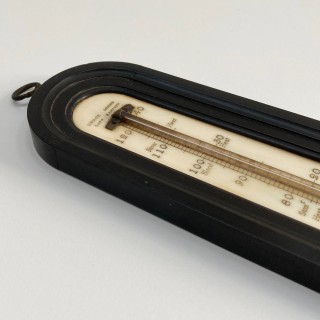 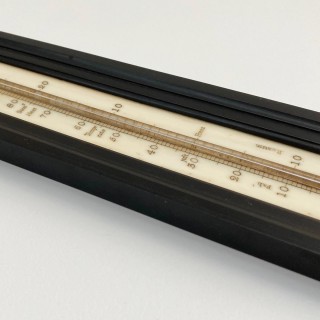 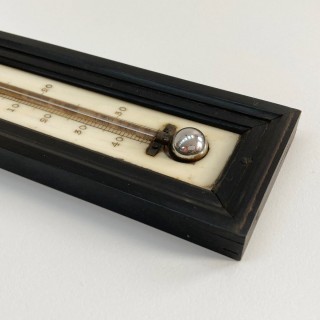 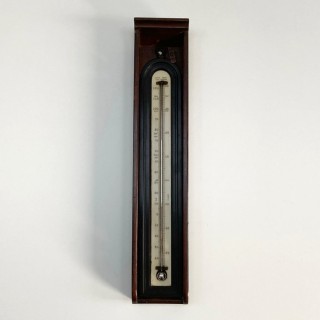 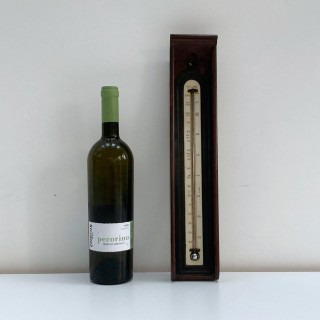 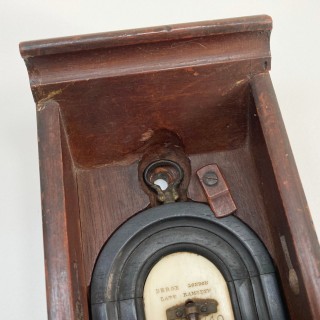 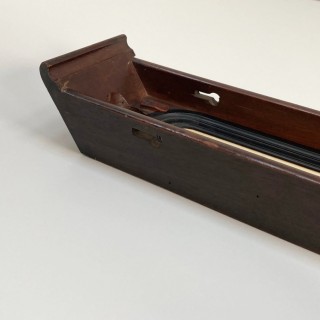 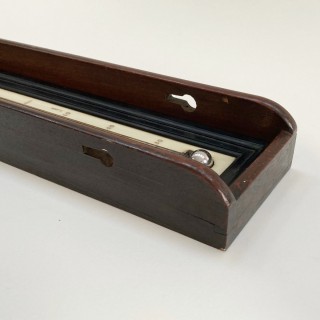 Comprised of a bone scale and graduated ebony surround measuring fourteen inches (35.5cms) high and two inches wide, this superb thermometer measures -40 to 120 Fahrenheit on the left hand side with associated engraved temperature indications and has a Reaumur scale measuring -30 to 40 on the right hand side. The domed top is engraved to Berge London, Late Ramsden and has a typically period hinged hanging ring mounted at the crest.

The thermometer is further mounted in a protective mahogany frame with sloped roof top and box frame sides. The case is routed out in order to give the thermometer a flush fit within the frame and it is beautifully made with small dove-tail joints to the top and bottom. It bears similarities to the later sloped roof design of Stevenson screens or tin hygrometer cases for external use but given the materials, it is unlikely that it would have suited an outside setting. My assumption is that it would likely have been used in a greenhouse or orangery type setting. It also has openings on either side suggesting that it was intended to be fixed by the side of the case to some other structure to complement other meteorological instruments.

The thermometer is a fine and working example of Berge’s early (post Jesse Ramsden) output with a long range scale and with an unusual case design. A very nice early thermometer.

Matthew Berge featured amongst the honoured list of Jesse Ramsden’s apprentices. Born in 1753 it is thought that he was apprenticed to Ramsden in 1767 whilst his older brother had been apprenticed to Peter Dollond a few years before.

Berge’s career decision to remain with the hugely famous Ramsden as his foreman means that his story is forever overshadowed but there is no doubting the trust and appreciation for Berge’s skill that Ramsden maintained throughout his career. Berge was perhaps the only person that Ramsden confided his methods to for hand dividing circles and Berge’s work on the Shuckburgh equatorial was much lauded following its completion.

These glimpses of Berge shining through the writings about Ramsden’s life are perhaps small appreciation but with no wife (and a son who had joined the East India Company), it was Berge that Ramsden chose in his will as the beneficiary for his premises at 199 Piccadilly.

I give and bequeath to my old servant Matthew Berge, the lease of my house and workshops No 199 Piccadilly next St James’s Church with my working tools and stock except those before mentioned on condition that he pays the remaining debts for building and repairing left at my death and I do so constitute and appoint the said Matthew Berge together with the above named Edward Pritchard to be joint executors of this my last will and testament

Berge continued to trade from Ramsden’s workshop at 199 Piccadilly and most of his work from this period is engraved as “Berge Late Ramsden” probably as a means of maintaining the connection with his master’s fame and notoriety. The shop became 196 Piccadilly following the building of Regent Street and he continued there for the rest of his life. Records show that he worked with the famous civil engineer Thomas Telford and later replaced Dudley Adams as the provider to The Board of Ordnance. A sale of The Duke of York’s instrument collection was held at Berge’s premises in 1807 and military patronage was continued by the like of Arthur Wellseley Duke of Wellington who is known to have used Berge telescopes and barometers whilst on campaign in the Peninsular and at Waterloo. Examples of these instruments now form part of the National Army Museum’s collection.

Matthew Berge died In 1819 and Thomas Jones (another of Ramsden’s apprentices) is documented as sending a letter to the Board of Longitude requesting that the circular and straight line dividing engines originally manufactured by Ramsden and owned by the Board, be entrusted to him. Jones had applied in the same manner after Ramsden’s death but Berge had been granted stewardship of the instruments at this point and was probably the catalyst for Jones’s patenting his own dividing engine.