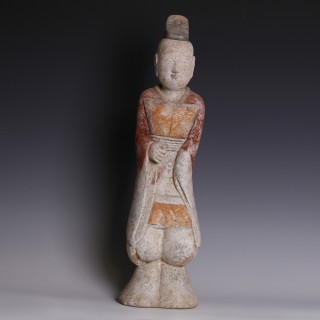 A finely moulded and coloured polychrome terracotta figurine depicting a Han male court attendant wearing a typical Han court robe with wide, flared sleeves and tapering trousers with bloomer terminals. His left hand is concealed under the sleeve, whilst the right forms a fist in front. He wears the traditional Han Dynasty court attire, known as shenyi, consisting of a long vest, thick collar and tied at the waist with a belt. Rich folds and detailed drapery on his garment are naturally rendered by confident engraving lines. Under his prominent official Han hat, his facial features are clearly engraved, with sensual lips painted in pinkish-red pigments. Given the perforation presented by his hand, he would have held a ceremonial weaponry in his hand.

From the collection of a West Country gentleman, formed in 1970s.

Very good condition, with original pigments visible to the surface.