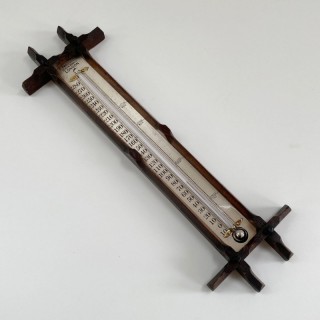 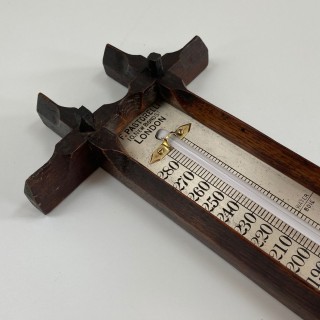 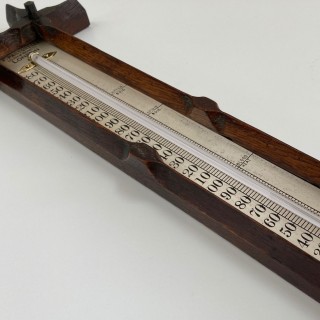 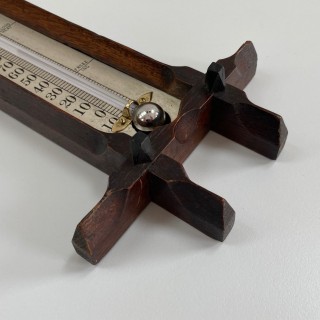 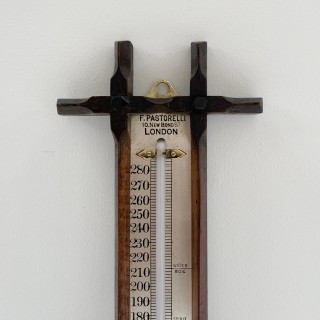 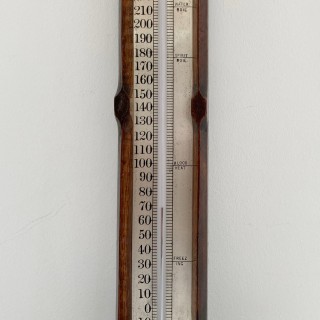 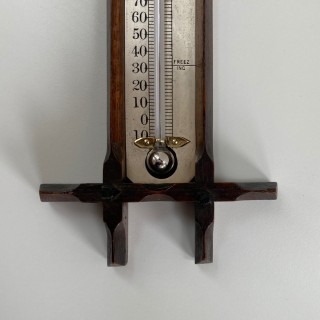 For sale, a Late Victorian Wall Thermometer by Francis Pastorelli.

Interestingly manufactured to mimic the “Oxford” style case design ordinarily encountered on Fitzroy type siphon tube barometers this example is comprised of a four part oak frame pegged together at each corner. The oak stretchers are part chamfered along each length and at each end.

The frame surrounds a large thirteen and a half inch silvered and engraved Fahrenheit scale reading an unusually large range from -10 to 280 degrees to the right hand side and with heat indications to the right. The scale is crested with the maker’s name, F.Pastorelli and the address of 10 New Bond Street. The thermometer has a very generous circular bulb with ceramic backed tube and a good width of bore for ease of reading.

A very unusual and interesting design for a thermometer.

The Pastorelli dynasty like most scientific instrument makers of Italian background were likely to have emigrated from the Lake Como area of Northern Italy. The first maker which appears in the records is a Fortunato Pastorelli recorded as working in Hatton Garden from 1805 to 1830. The premises at 4 Cross Street is common among all of the subsequent Pastorelli makers that appear in the records and so it can be confidently assume that the business remained a family affair throughout most of the Nineteenth Century. The business passed in 1830 to Fortunato’s son Antonio and continued much as before producing fine barometers and weather instruments.

In the late 1840’s, Antonio took on his son Francis to form Pastorelli & Son and it is likely that Antonio either retired or died by 1849. From 1851, the company developed under the stewardship of Francis Pastorelli and the firm is listed as being amongst the exhibitors at The International Exhibition in London by 1862 where they were awarded a prize medal for “good levels and general excellence of surveying instruments”.

Following the company’s success, the firm moved to 208 Piccadilly and then in 1880 to the prestigious address of 10 New Bond Street. Post 1880 sadly their activities are somewhat undocumented but in the Late Nineteenth Century a partnership was agreed between Francis Pastorelli and Alfred Thomas Rapkin of Hatton Garden. They continued into the Twentieth Century and maintained their specialism in meteorological instruments throughout.