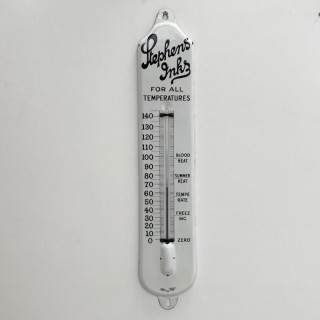 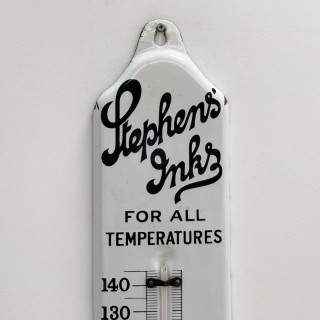 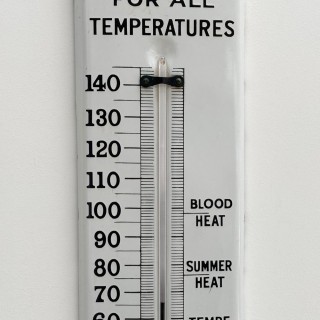 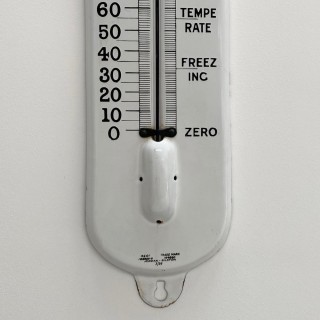 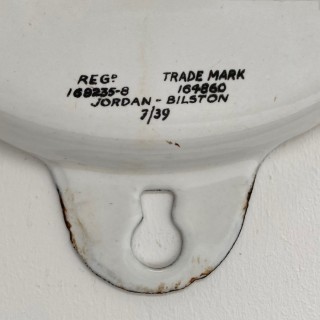 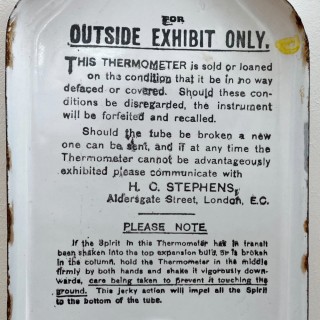 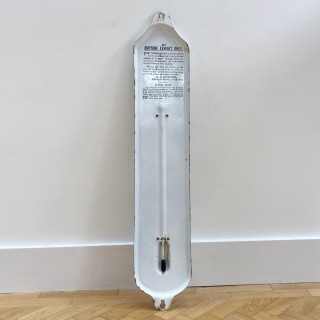 Measuring 92cms high this spectacular sign from the early twentieth century was provided by Stephen’s Ink Company to advertise on the side of newsagents and railway stations throughout the UK.

The sign reads “Stephen Ink for all temperatures” a reference to the durability and usability of the patent inks that they manufactured. It has a Fahrenheit scale which reads from 0 to 140 and has an enormous spirit filled thermometer running through a central groove with the bulb positioned to the back to offer protection.

The base of the instrument is marked with a registered design number and presumably the month and date of manufacture (7/39). The reverse also provides instructon for the receiver as follows:

“FOR OUTSIDE EXHIBIT ONLY

This thermometer is sold or loaned on the condition that it be in no way defaced or covered. Should these conditions be disregarded, the instrument will be forfeited and recalled.

Should the tube be broken, a new one can be sent, and if at any time the thermometer cannot be advantageously exhibited please communicate with HC Stephens, Aldersgate St, London. E.C.

If the spirit in the thermometer has in transit been shaken into the top expansion bulb or is broken in the column, hold the thermometer in the middle firmly by both hands and shake it vigourously downwards, care being taken to prevent it touching the ground. This jerky action will impel all the spirit to the bottom of the tube.”

Stephen’s Inks were formed in 1832 by Henry Stephens and registered at 54 Lower Stamford Street, Southwark. Benefitting from the introduction of the penny post in the 1840’s, the company went on to take part in the Great Exhibition of 1851 and had continued success at various worldwide exhibitions that continued throughout the nineteenth century. Upon Stephen’s death in 1864, his family continued the business, his son later becoming Conservative MP for Hornsey & Finchley. He resigned in 1900 owing to his opposition to the Boer War.

In the early twentieth century, Stephen’s Inks would be used during Scott’s ill-fated mission to the South Pole and were also used to sign the Treaty of Versailles that formally ended hostilities in World War One. Having survived the destruction of their factories in World War Two, the story of Stephen’s Inks is one of gentle decline and company take overs until its final period in the 1980’s.

These signs are amongst the most collectible of all advertising signs and these giant thermometers were featured in films such as 1939’s Brief Encounter where it can be seen in the waiting room at Carnforth Station in Lancashire and Ealing Studio’s “Passport to Pimlico” of 1949.

The thermometer is in good working order and the condition of the enamel is superb. One of the best I have seen, they normally suffer from excess rusting and enamel loss or from broken thermometers so it is a pleasure to find one in this state of repair.