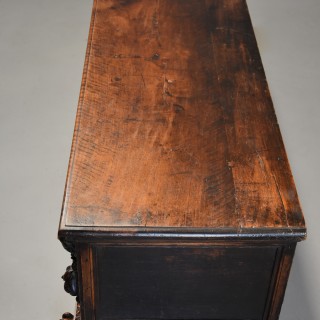 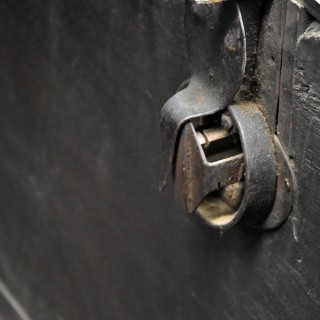 A late 16th century (circa 1580) Italian carved walnut cassone or marriage chest of fine patina, probably from the Venetian or Lombardy regions of Italy.

This cassone consists of a solid walnut top with moulded edge and dentil moulding below, the top opening to reveal a metal lock and hinges with a good storage area.

The front consisting of a superbly carved panel with central carved cartouche, a carved mermaid to either side with floral and foliate design, the mermaids flanked by carved lions all surrounded by a carved border, to the outer side of the panel carved lion masks with suspended ribbon and fruits – the mermaids depicted possibly a symbol of fertility, love and life, the lions of strength and courage.

This leads down to a carved moulded edge, the panelled ends with moulded edge below all supported on carved paw feet to the front, one with small losses, and bracket feet to the back.

The Renaissance was the great period of the cassone, although they continued to be made up until and during the 19th century. They have survived often due to the fact they were made in pairs as marriage chests. Also, as they were of such good quality and design the generations who owned them passed them down and they were treasured as works of art.

This cassone is in very good original condition for age with evidence of some old repairs which is to be expected, is of stable construction and can go straight into a home.

This cassone would look stunning as a statement piece against a plain wall in any interior, either old or new, it would also make an ideal coffee table or great for storage in an entrance hall or bedroom etc.