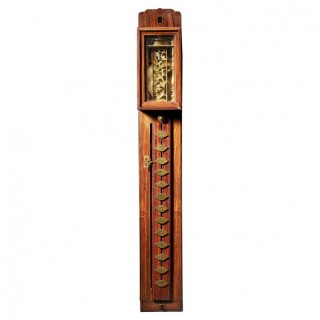 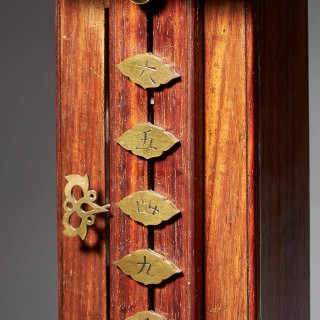 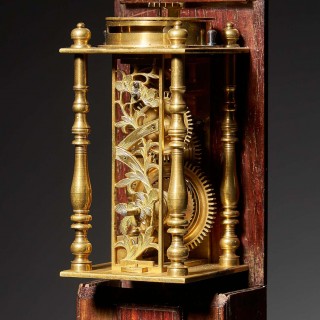 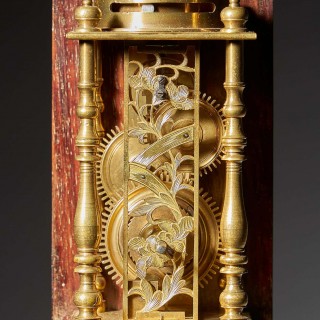 The very fine 30-hour, weight-driven movement is constructed between bars and consists of a going train only. It has verge escapement with balance on top of the upper plate. Around the balance is a circular surround with an aperture. A small brass convex disc on the balance acts as a false ‘pendulum’. It is driven by a lead weight which carries the hand. The skeletonised brass front is engraved with a chrysanthemum motif. Top and bottom plates are connected by four turned pillars.

The wooden dial – the pillar – has thirteen movable engraved brass hour chapters, called toki. The Japanese characters on the toki depict the following numbers from top to bottom: 6, 5, 4, 9, 8, 7, 6, 5, 4, 9, 8, 7, 6. The time is indicated by a pierced brass pointer which slides down the case trunk.

The movement is situated a shitan case, the hood being glazed on all sides so that the movement is entirely visible. To wind the clock, the hood can be removed by unlocking a wooden turnbuckle. The winding key is stored in a small drawer at the bottom of the pillar.

Height: 42 cm; width: 6cm; depth: 6cm.
Japanese time measurement is very different from its counterpart in the Western world. Instead of a fixed value for an hour the length of an hour in Japan, called toki is variable depending on the length of the day and night. Day and night are both divided into six toki, which lasts from sunrise to sunset and from sunset to sunrise. In summer the days are longer than the nights and consequently a day toki last longer than a night toki. In winter it is the other way around. This is the reason why Japanese clocks have sliding chapters to adjust the length of a toki. There are also clocks with a fixed chapter ring and a revolving hand. To regulate the lengths of the toki the weights on the foliot can be moved, which makes the clock go faster or slower. The hour numerals run from nine to four, the latter being midday. Japanese clocks indicate how many hours there are to come, whilst European clocks indicate how many hours have past. In Japan the figure 9 was holy. Each toki, twelve in total, also had its own sign of the zodiac, which were sometimes indicated on a ring around the chapter ring.