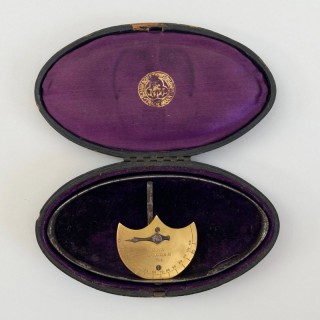 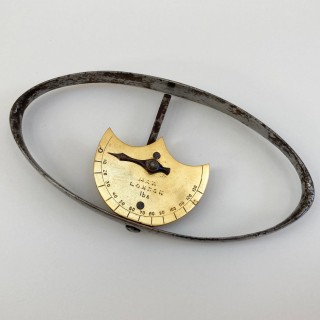 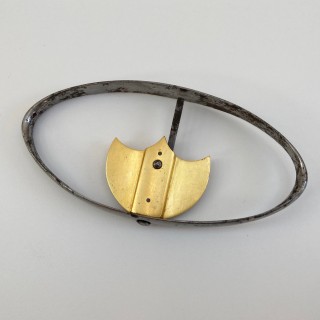 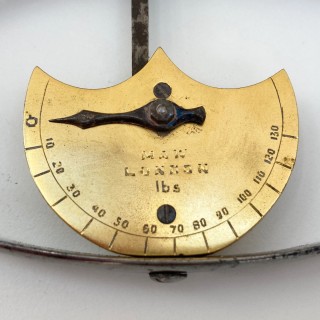 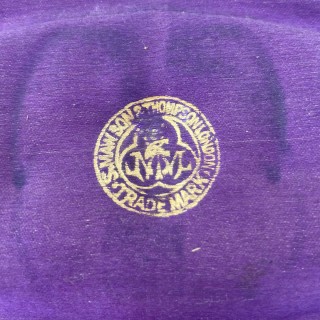 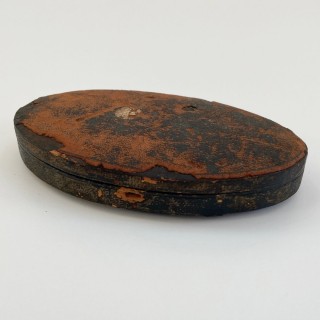 Created to test hand strength, this interesting medical item is comprised of an oval piece of steel with a piece of steel attached to the inner circle of the instrument. The user squeezes the oval ring and this action presses the steel rod onto the scale which is attached at the base. The more pressure exerted on the ring, the harder the rod affects the scale reading.

The shield shaped scale plate is comprised of a gilt brass scale measuring 0 to 130 pounds of pressure with a blue steel pointer which can be reset by hand. It is engraved to the centre for “Maw London”. (I will of course only admit to achieving personal readings of over 110 lb’s….ahem…..)

The instrument retains its original oval case with purple silk and velvet interior. The silk lid is gilt embossed with the company name of S Maw, Son & Thompson, London” with the trademark to the centre. Sadly the leather outer covering of the case is in a less than perfect state but it has ensured that the instrument has remained well protected over its 150 year existence.

The Maw dynasty were a huge supplier of medical instruments during the Nineteenth Century and began with George Maw in 1807 in Aldergate Street, London. His sons, John Hornby & Solomon both joined the business at an early age and by 1829 it had been retained solely by Solomon Maw after the retirement of his Father and the removal of his brother to manage a tile business in Worcester.

The firm continued successfully under the stewardship of Solomon Maw and his son Charles entering the business in 1860 led to the new name of S Maw & Son. Sadly, Solomon died the following year and this unfortunate situation led the company to be renamed (somewhat confusingly) to S. Maw, Son & Sons after Charles’s sons were then introduced after him. By 1870 with the increasing demand for Maw’s products and perhaps the slight lack of experience of its young owners, the Maws formed a partnership with John Thompson who had worked for the firm since 1851. With his understanding of the business and the Maw’s endeavour, the firm continued to grow both in the UK and across the globe.

In this comfortable state, the company continued until 1901 with the death of John Thompson and then just four years later, the death of Charles Thompson after a long illness which precluded him from visiting his London premises. The family evidently treated the workforce well, giving them an additional weeks pay to celebrate Charles’s fiftieth year in business and hosting yearly company cricket matches at his house whilst he was convalescing.

Following his and Thompson’s death, the company changed to S. Maw & Sons and they continued to thrive through the First World War periods, taking over the famous business of Henry Crouch and also changing their name to Maw Pharmacy Supplies in 1940.

It is not entirely clear what fate befell the company after this period but it seems that it did not last much further than the mid part of the Twentieth Century.