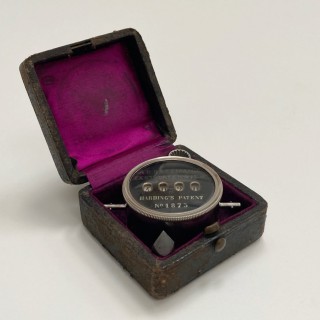 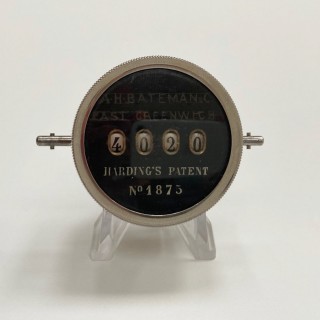 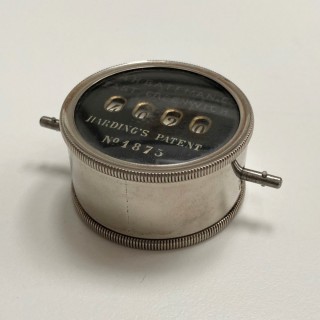 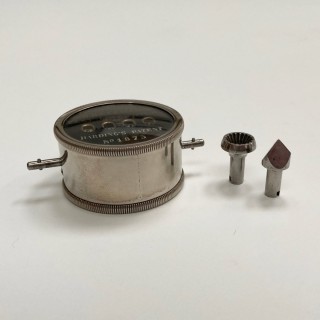 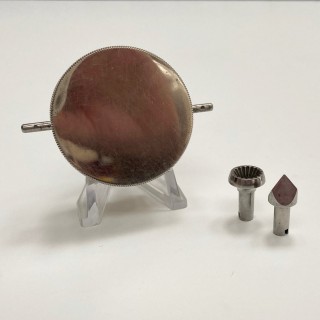 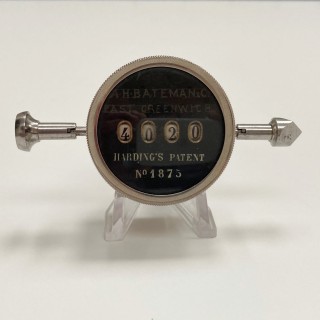 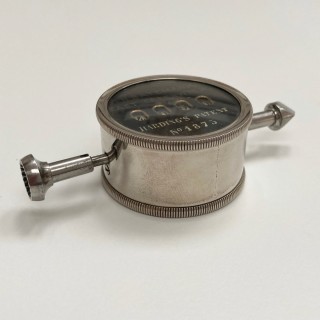 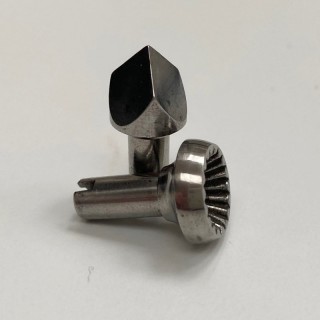 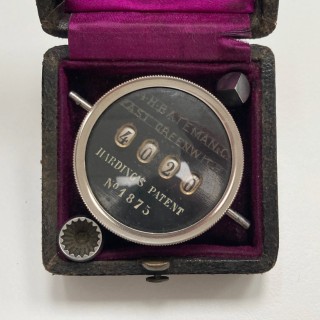 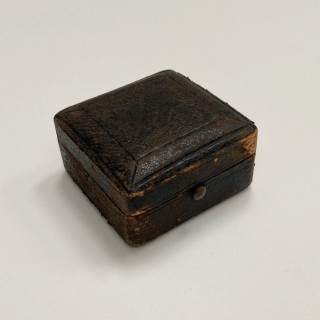 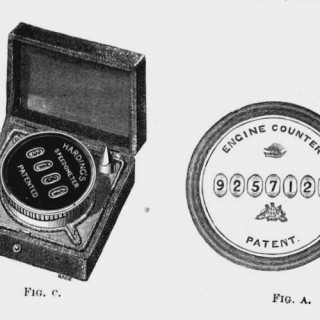 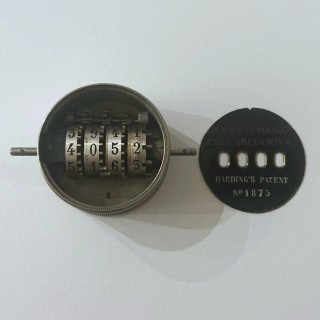 Enclosed in a pocket sized, leather covered case with red silk and velvet interior, this 1 ¾” diameter revolution counter is comprised of a nickel plated case with glazed front protecting a brass, japanned plate with apertures revealing four number dials. This fascinating mechanism is explained in more detail below by virtue of its appearance in the 1878 release of the voluminous catalogues of Negretti & Zambra.

The case with which the record of these counters can at any time be read off is a great advantage which they possess over all dial counters (such as those on water and gas meters), in the difficult reading of which important errors are often made.

Other advantages of these counters are, great simplicity of parts and solidity of construction, in consequence of which it is almost impossible for the apparatus to get out of order.

It consists in an ingenious combination of wheel and pinions. Each number wheel carries on the right edge of its rim twenty teeth, and on the left edge only two. The pinions are provided with eight unequal teeth, four being as broad and four half as broad as the pinion. Thus, as each number wheel completes its revolution, it moves the next one on one-tenth, and all the wheels are safely locked, except at the moment when they are being moved forward by their pinions. Some idea of the perfection of this arrangement may be gathered from the fact that the Pocket Counter or Speedometer, of which the mechanism is a mere reduction of that of the large counters, may be used at speeds over 5000 per minute.”

There were four examples included in the catalogue ranging from large engine counters, small machine counters, pocket counters or speedometers and turnstile counters. This is of course, an example of the pocket version.

The face of the counter is marked for Harding’s Patent No 1875 and it is etched with the recipient company name of AH Bateman & Co, East Greenwich. The spindles which emanate from either side of the counter are intended to receive the attachments which would allow connection to the engine required. A fascinating and very tactile instrument which became an undoubted success for Harding during its promotion at the start of the 1870’s.

The English maker, Thomas R Harding began his business in 1836 in Lille, manufacturing cast steel pins and combs for textile production. The French location for the business is unsurprising when considering the huge reputation that Lille had for its centuries old textile industry.

That it relocated in 1858 to Leeds could be an indication of the positive economic effects of the Industrial revolution in England or purely a yearning to return home but it certainly did not harm the Harding business. In 1864, the company expanded to new premises, the Tower Works which featured state of the art extraction towers built to reflect the Italianate style and which remain a listed property to this day.

I am unable to find a patent application for the counter but owing to their appearance in the Negretti & Zambra catalogue of 1878 and adverts from 1872, we can be sure that the company were expanding their product range to support the varying needs of industry by this time, and also supplying other instrument making companies.

By 1890, Thomas Harding had retired and his son, Colonel TW Harding took control of the company and sought out a partnership with two related firms, William Rhodes & Co and Richardson, Child, Christy & Co. It was a slow process but by 1895, a new company of Harding, Richardson, Rhodes & Co was created, eventually becoming Harding, Rhodes & Co which continued to trade until 1981. Examples of numerous variations on the original counter can be seen in this company’s advertising as late as 1950.

The company of AH Bateman & Co who purchased this pocket counter were formed in 1877 and were producers of emery wheels. The partnership was dissolved in 1892 providing good dating evidence for this example being of reasonably early manufacture.