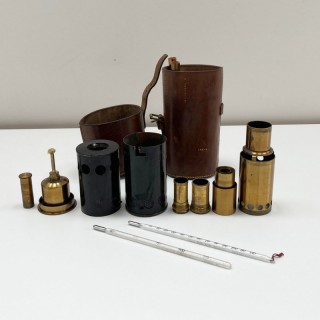 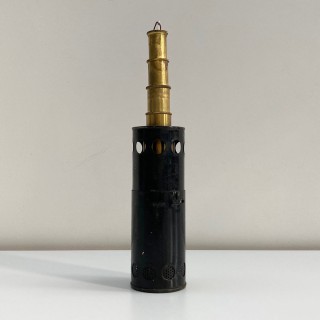 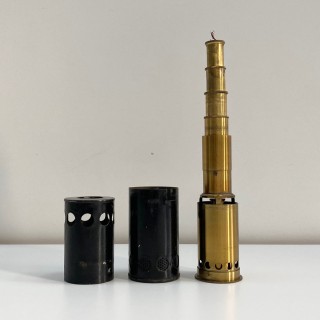 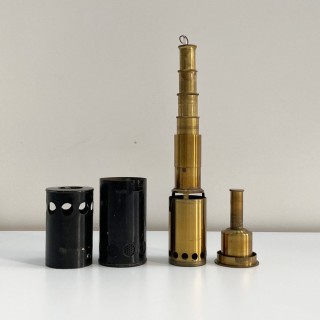 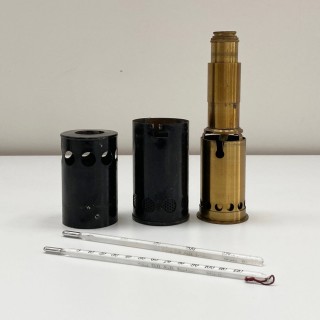 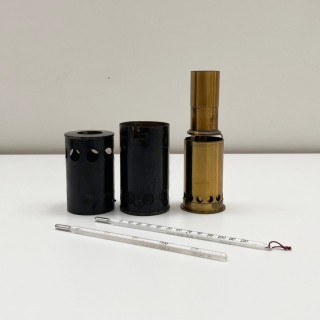 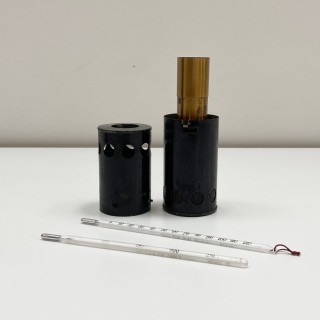 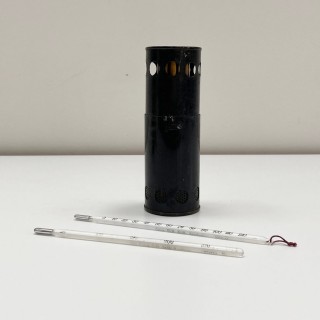 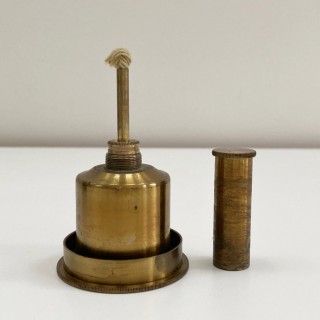 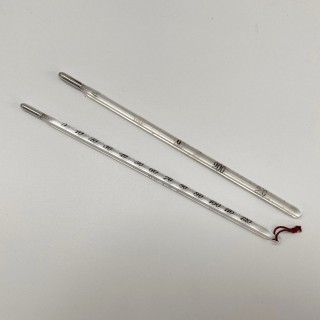 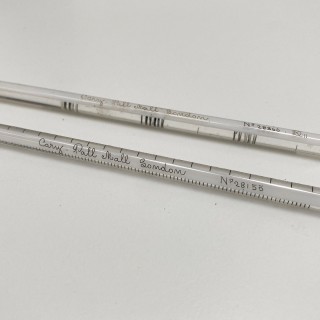 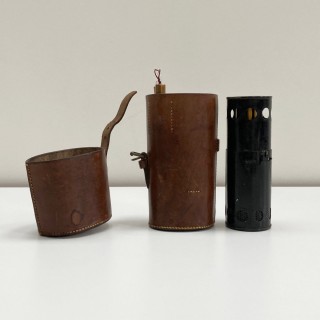 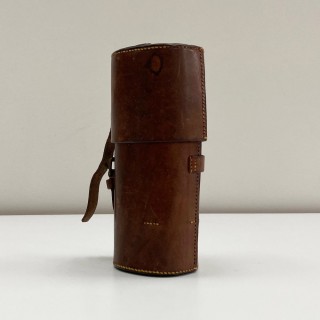 For sale, a Late Victorian Cased Hypsometer by Cary of London.

Contained in a leather carry case, this compact travel hypsometer is comprised of a spirit burner, a water vessel with telescopic jacketed column, two varying scale thermometers and an outer black painted, two part canister in order to allow steam to circulate. All of the components are neatly arranged so that they can be stored conveniently whilst travelling.

This uncommon instrument first invented by the eminent scientist William Hyde Wollaston and later improved by numerous others, is used as a means to measure elevation using atmospheric pressure. Its principle is based upon the fact that the boiling point of water becomes lower as atmospheric pressure becomes lighter. To use the instrument, water would be placed in the base of the telescopic column with the barrels extended and with the spirit burner placed below, the water would be heated to boiling point. The aperture at the top of the column allows for a thermometer to be placed inside in order to measure the boiling temperature of the water at a given elevation and through calculation, an exact elevation could be attained.

Popularised in the mid Nineteenth Century and used extensively in India for surveying by Colonel Sykes and later General Boileau (the pun is not intended), the hypsometer was considered a much easier instrument to carry for travel than attempting to manage the fragility of a mercury barometer in hard to reach and rugged terrain. This fact was not lost on the earlier manufacturers such as Casella. His catalogue of the early 1880’s states:

“Wherever the measurement of mountain heights is required to be taken by other means than the theodolite, or standard barometer, or where there may be danger or breakage of either, without any means of comparing or replacing them, this cheap and simple means of measuring heights will be found both efficient and handy, and it is at all times a reliable test with which to compare an aneroid or any other similar instrument, which from time to time requires to be compared and adjusted”

He continues to provide a quote from the famous Himalayan explorer, John Dalton Hooker:

”For the measurement of great mountain masses and continuously elevated areas, I conceive that hypsometrical results are as good as barometrical ones. For the general purposes of botanical geography, the boiling point thermometer supersedes the barometer in point of practical utility; for under every advantage the transport of a glass tube full of mercury, nearly three feet long, and cased in metal is a great drawback to the unrestrained motion of the traveller.”

The quote is insightful but perhaps moreso a masterclass in advertising. It is certain that the hypsometer was certainly an advantageous instrument over the mercury barometer but the quote by Hooker was likely to have been made in the 1850’s after his return from the Himalayas (30 years before) and more importantly, the new aneroid barometer had largely superseded the requirement for either instrument. Casella is of course, well aware of this development and gently argues the case for the hypsometer as a means to compare aneroid readings.

Having said all of the above, it does seem that the hypsometer did continue to be of some value. This example can be dated quite succinctly to the 1890’s and they continued to be produced into the early part of the Twentieth Century but their use dwindled in favour of the developments in aneroid barometers. It is another instrument much like the Adie’s sympiesometer that was developed in the Early Nineteenth Century and although considered of scientific value, only had a relatively short period of success due to the aneroid. As such, both are less familiar and certainly less common than their successor.

An interesting and complete example by a well respected London firm.

The Cary dynasty were highly regarded instrument makers of the late eighteenth and nineteenth centuries, the two brothers William and John forming a partnership manufacturing both scientific apparatus and globes from the London address of 181 & 182 The Strand. William had previously served his apprenticeship with the hugely renowned London instrument maker Jesse Ramsden whilst John was a trained mapmaker. A devastating fire in 1820 led to the brothers combining the two businesses into a single premises at 86 St James Street although throughout the 1820’s they seem to have individually occupied various premises on The Strand in addition to the former.

William Cary died in 1825 leaving generous sums of money to his brothers and his immediate family and his nephews George and John Jr Cary continued their Uncle’s business initially at their father John’s original address at 182 The Strand and then later moving to 181 The Strand in 1828 suggesting that they had re-occupied both original premises after the fire. As before it separated the map making and scientific instrument businesses apart but maintained close proximity.

Having both been brought up and trained as map-makers and lacking the training and skill of their Uncle, the brothers maintained the services of Charles Gould, William Cary’s foreman and it seems likely that Gould was largely responsible for running the scientific instrument making arm of the family businesses from this point. Gould was responsible for the invention of the historic Cary-Gould microscope and given the freedom that he was given to advertise his name in association with the instrument, it is sensible to assume that he operated with a significant amount of freedom from the new owners and with a significant amount of goodwill from John Cary senior.

John Cary senior eventually died in 1835 also leaving the other side of the Cary business to his sons and advertisements from the period suggest that it is likely that they both graduated to map and globe making leaving Gould and his son Henry to support the instrument making business with Henry becoming operational successor upon his father’s death in 1849. John Cary Junior’s death shortly after The Great Exhibition in 1852 resulted in George Cary divested the instrument making to Henry Gould in its entirety but historic allegiances and/or business acumen probably led to the maintenance of the William Cary name until Henry Gould’s eventual death in 1856.

By 1861, Gould’s widow Charlotte seems to have changed the name of the business to become “H. Gould, Late W. Cary” but shortly afterwards formed a partnership with Henry Porter in 1863. At this time advertisements show the name, Gould & Porter (Late Cary) and continued in that vein beyond Charlotte’s death (in 1865) until 1874 whereafter Porter used Cary & Co or his own name with the addition of “sole successor to William Cary”. The business also moved from the original Strand premises in 1890 to new premises at 7 Pall Mall.

Upon Porter’s death in 1902, his sons Sydney & Clement maintained the business and under their stewardship, won a silver medal at the St Louis International Exposition however the business had ceased to exist by 1930, probably having suffered from the hardships of the First World War.