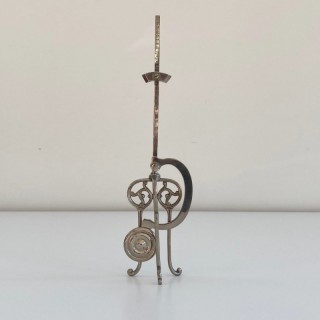 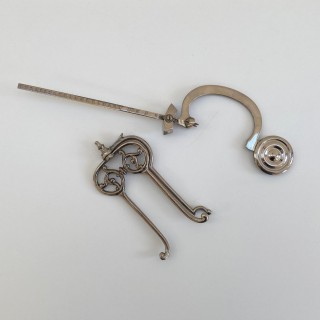 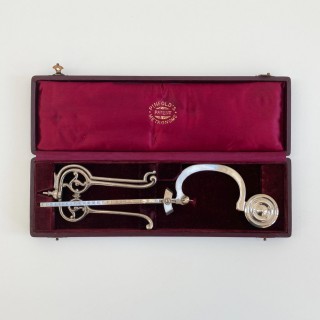 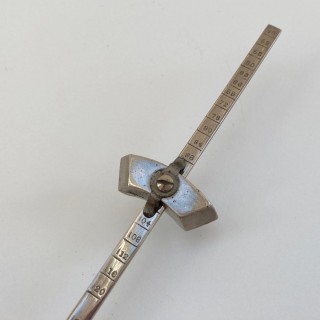 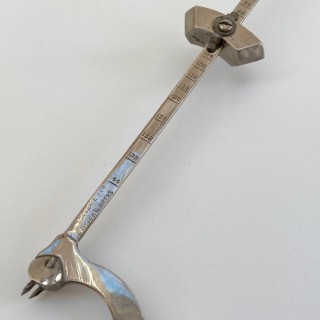 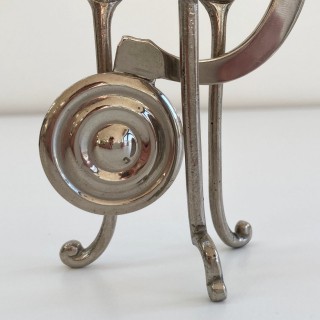 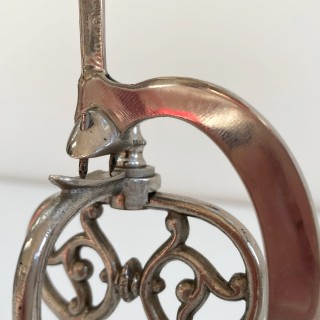 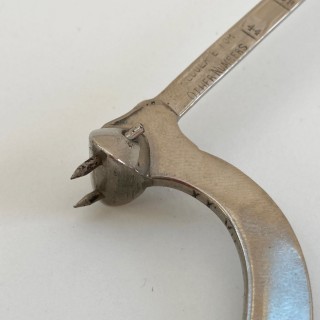 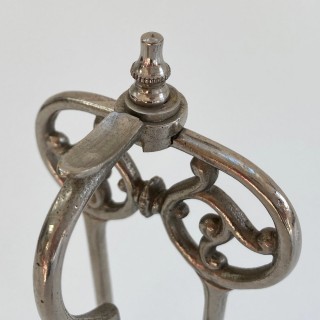 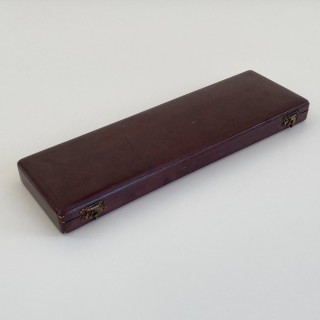 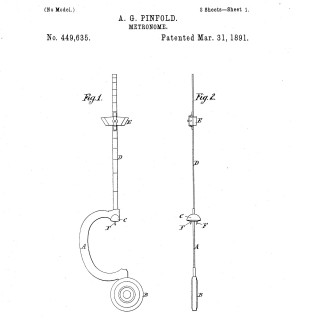 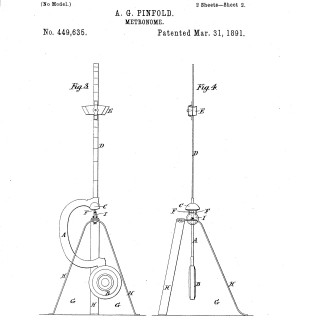 Patented by Arthur Gough Pinfold in April of 1884, this ingenious invention consists of a decorative folding stand designed to fold flat for transit and a second piece comprised of a pendulum on an extended shaft which has a sliding weight attached. The shaft is engraved with a scale to allow the precise regulation of time according to where the weight is placed along its length. The pendulum is finely balanced upon the base by means of two needle point legs attached at the upper point of the C section of the shaft.

Both are enclosed in their original morocco leather fitted case with crimson velvet and silk interior. The interior of the lid emblazoned with gilt lettering stating, “Pinfold’s Patent Metronome”.

Within the original patent submission, Pinfold describes his invention as follows

“The object of the present invention is to provide a simple, cheap, efficient, noiseless, and readily portable metronome or instrument capable of being adjusted so as to oscillate any required number of times per minute, and which may be employed for indicating or marking different times in music, or for rating and adjusting horological instruments, such as watches, chronometers, etc. The improved metronome has no springs, weights, escapement, wheels, or other parts which can get out of order, and it is always ready for use, as it can be placed and made to operate upon a shelf or other convenient projection, or even upon the finger, or a special stand may be provided to support the same, the whole being capable of being inclosed in a suitable case and carried about the person.”

With little requirement for expensive clockwork manufacturing, Pinfold’s invention was an immediate success and far more affordable than any of its competitors. Production increased throughout the 1880’s although it became overwhelmed with success and the company was declared bankrupt in 1894 just three short years after the patent was extended into the US.

Arthur Gough Pinfold was born in 1865 in Buckinghamshire, his Father a musician, watchmaker and jeweller. Both Arthur and his younger brother George were trained in watchmaking and in the early 1880’s the family moved to Yorkshire from where the business of A&G Pinfold was originally established in response to the patent’s success. Sadly after the business difficulties encountered by the company, George moved his family to Margate due to ill health but Arthur continued to produce inventions after this point. In the same year as the company’s failure, Arthur patented a “domestic dish washer” that combined a mop and a brush on the same implement (the likes of which are still produced today) and another two patents were lodged for diverse ideas such as trouser stretchers and chin rest for violins (1909). In 1920, he finally gained similar success by inventing the Pinfold’s Patent Archimedian Ring Sizing Tool which was produced at a factory named the Metronome works in Bradford. Although the metronome was never produced beyond its initial demise in 1894, the memory of its success must have remained with Pinfold. A great story of perseverance, Arthur must have died content in 1940!