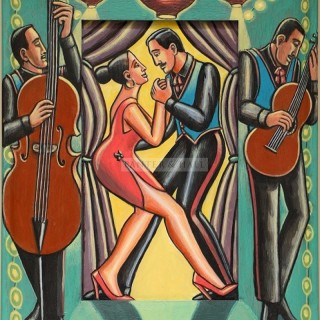 We regularly carry new work by PJ Crook in stock and hold solo exhibitions in the gallery every few years. Please do contact us to be added to our mailing list for future events.

Although PJ lives and works in Gloucestershire, she is an artist of international repute, having dealers in Paris, Canada and New York as well as London. Later this year she has a solo exhibition with us in London whilst next year the Morohashi Museum of Modern Art in Japan are staging a large exhibition of her work drawn from their own large collection and new paintings. Until the end of May, her ‘Literary Lamb’ sculpture can be seen by Temple Bar behind St Paul’s Cathedral as part of the Shaun in the City trail.

PJ’s paintings combine a highly distinctive style with extraordinary technical mastery. Rather than painting from photographs or direct observation, PJ prefers to draw from a combination of remembered observation and imagination, resulting in an intuitive and resolved composition. Few contemporary artists are more accomplished at depicting perspective or depth of field, and the viewer has a sense of being invited into each painting, encouraged by the inclusion of the frame in the picture surface.

PJ has received numerous awards including an honorary doctorate of art in 2010 and MBE for services to art in 2011.

Direct From the Artist’s Studio.