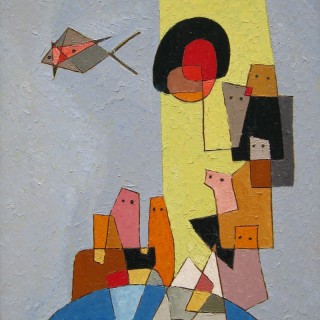 Denise Mannoni was born in Nîmes, France in 1918. She spent an idyllic early life on various French colonial islands including Martinique, Reunion, and Madagascar where her parents educated her in European History and History of Art. It was during her childhood, inspired by the beauty of the islands and her delight in the images of European art that she began painting and drawing.

Denise Mannoni returned to France after the Second World War in 1948, following a violent attack on the French colony by Madagascan rebels. She lived first at Toulon, and then Paris, initially supporting herself by working in a bank, although she continued to pursue her passion for painting. She did, however, find it hard to reconcile herself to her new life away from the warm and hitherto carefree life on Madagascar. She married in 1952, which brought stability and material comfort, allowing her to devote herself to her painting. This enabled her to further study in Paris museums, and in particular the Musée d’Art Moderne, the works of artists she had only seen in books, and to observe the very vibrant and exciting world of artists working in post-war Paris.

Denise Mannoni was a very independent artist who was keen to observe but not imitate. Her influences were Sonia Delaunay, Raoul Dufy, Joan Miró, and Paul Klee, the medieval stained glass windows to be found in cathedrals such as Chartres and Notre Dame, and the warm and vibrant colours of her beloved islands. She spoke often of “disembodied objects” and “the will to find that essence beyond their superficial appearances.”

Denise Mannoni’s first exhibition in Paris was at the gallery of a distant cousin, Paul Weiler. Three years later in November 1964 she had another exhibition at the Galerie Michel Boutin in the Rue du Faubourg St.Honoré to great critical acclaim. La Semaine de Paris talked of “the result of an interesting research into the synthesis of figurative and abstract art,” whereas the journal L’Art under the title Mannoni – Lyrical Cloisonné remarked “After working for twenty years in solitude, Denise Mannoni has decided to exhibit her paintings; very original, and composed with a subtle and unique refinement. Executed in flat planes of colour in the manner of cloisonné, slightly in the spirit of Paul Klee, but on a larger scale, her paintings depict a familiar world depicted decoratively in rich, glowing colours which nevertheless retain a sort of lyrical humour and beautiful form.”

In 1966 Denise Mannoni met the gallery owner Valerie Schmitt. This initial encounter was to lead to a life-long collaboration, both in professional terms and those of friendship. Her first one-woman show at the Galerie Valerie Schmitt was in the early spring of 1967, where she showed forty seven paintings created between 1953 and 1967, which was a great success. Pariscope enthusiastically commented, “The works of Denise Mannoni are a great and happy discovery, a woman painter whose works have a youthful glow, sensitive and intelligent. It would be easy to classify her as a ‘naïve’ painter, for her smiling and gracious vision of a world close to paradise. But here, in the latest paintings Denise Mannoni has lightened the composition, invented signs and forms, in the manner of those rare artists whose creative imagination has been used as a support in the pursuit of new ways of thinking and seeing, such as Klee, Brauner, and Picasso. Denise Mannoni’s art is not a flash in the pan, and she is a breath of fresh air and new blood in today’s art world, with her individual and innovative vision. A must see.“

As well as her regular successful exhibitions with Valerie Schmitt (twenty in all), she exhibited widely throughout her life, including the Salon des Terres Latines (1967 – 1972), and the Musée d’Art Moderne where she exhibited two paintings. These were admired by a visiting American gallery owner who invited her to exhibit at the Gimbels Gallery in Pittsburgh. She also showed her work at Art Expo ’71, and various French provincial group salons. In 1974 and 1975 she participated in an International Art Fair of Contemporary Art at the Pavillon des Exposition at the Place de la Bastille.

Denise Mannoni devoted her life to art, and created during her lifetime 590 paintings, 758 drawings, and 25 ceramics. Sadly, ill health prevented her painting from 1994, and drawing from 1996, and she died in 2003. The art of Denise Mannoni reflected her personality, at once contradictory and without compromise, each painting telling a story in pursuit of the perfect shape and form.

Dealer Ref: ME I