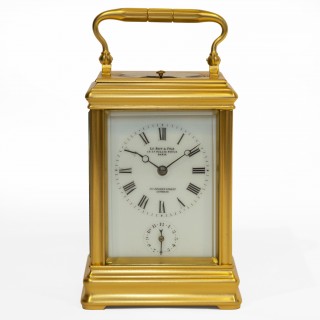 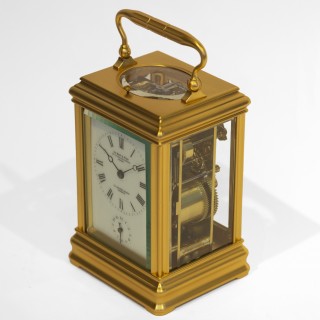 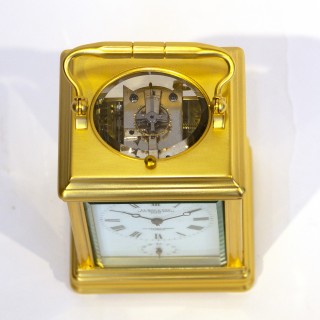 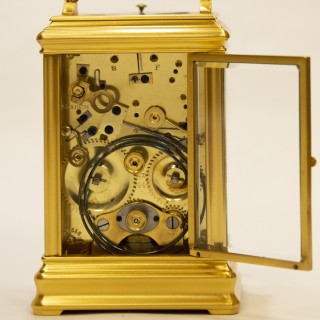 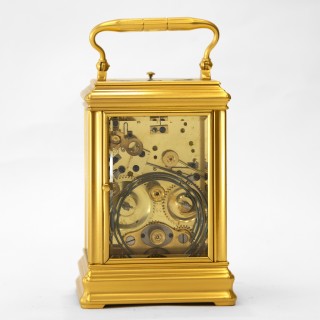 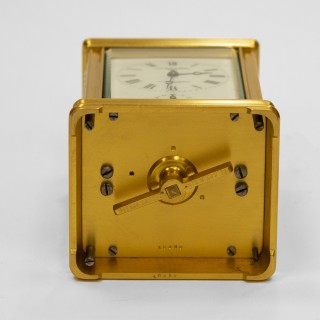 A rare clock, with a patented winding mechanism from Leroy & Fils which was quite ingenious. The large winding key is permanently affixed to the base. Turned in one direction, it will wind the going side of the clock, in the other direction it will wind the strike side. Thus a forwards/ backwards wrist motion winds both sides. And there is no need to find the key first. This design was patented by Leroy (patent number 9501), and the key is so signed.

The clock is presented in pristine condition. The cannalée styled case is regilded in a soft satin finish. All beveled glasses are perfect. The case and movement are all stamped with the serial number 15828.

The restored white enamelled dial is in perfect condition, the Roman time dial over the small Arabic alarm dial. It is signed LE ROY & FILS, 13-15 PALAIS ROYAL, PARIS.  211 REGENT STREET, LONDON. Interestingly, in the book by Charles Allix & Peter Bonnert, Carriage Clocks, Their History and Development, these bottom-wound clocks and discussed on pages 219-221. It states that Leroy & Fils’ address at 57 New Bond Street ‘will usually, if not always be found on bottom-winding clocks’. In this example, it is not.

The eight-day movement strikes the hours and the passing of the half hour on a coiled gong. It will repeat the last hour on depressing the button on the top. The alarm key is permanently attached to the arbor on the backplate, and knurled buttons are fixed for setting the time. Some gear wheels are exposed on the backplate in this design. The silvered platform escapement has a narrow balance cock.