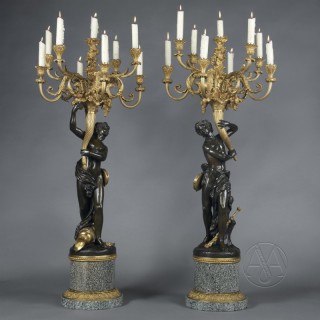 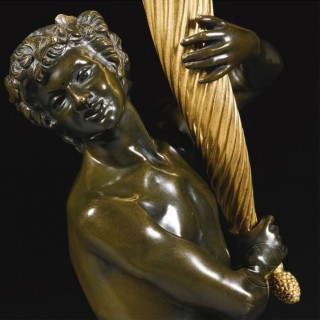 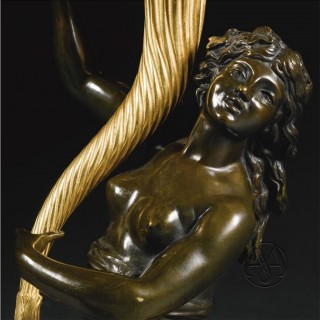 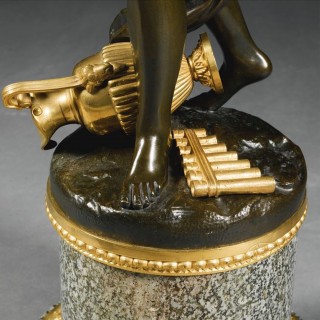 The candelabra are in the form of a patinated bronze faun and bacchante raised on green granite bases with spreading stiff leaf bands. The faun bears at his hip a gilt-bronze tambourine; at his feet is a thyrsus. A gilt-bronze ewer and pan pipes are set at the feet of the female bacchante, who also has a tambourine suspended from her belt. Each figure bears a gilt-bronze spiral-twisted cornucopia issuing fruited vines and candle arms terminating in foliate sconces.

Although traditionally attributed to Clodion, it is more likely that the original model for this pair of candelabra, which now reside in the Louvre, (inv. OA 5316-5317), was designed by François Rémond. A drawing showing an identical figure to the female bacchante attributed to François Rémond and dated 1785 survives in the Musée des Arts décoratifs (Paris). Examples of nineteenth century versions of this pair of candelabra can be found in the Ostankino palace in Moscow, the royal Palace in Madrid, Waddesdon Manor and Buckingham Palace.

The ciseleur-doreur François Rémond (1747-1812), was a leading Parisian gilder and bronzier during the second half of the 1700’s.

He began his apprenticeship in 1763 with the doreur Pierre-Antoine Vial, and was elected maître on 14 December 1774. He worked principally for the marchand mercier Dominique Daguerre, although he was also employed directly by ébénistes such as David Roentgen and Jean-Henri Riesener and collaborated on some pieces with the bronze caster Pierre Gouthière, helping him on some of his larger projects.

Rémond built up a successful business patronised by members of the French court, counting Marie-Antoinette, the Comte d’Artois, the Duc de Penthièvre and the Comte d’Adhémar amongst his principal patrons.