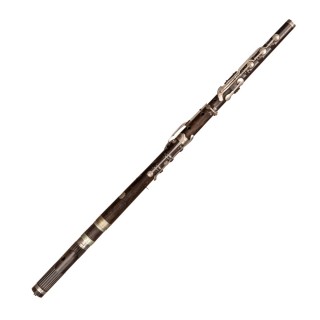 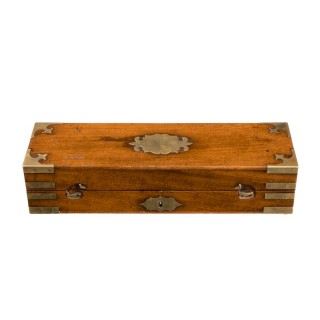 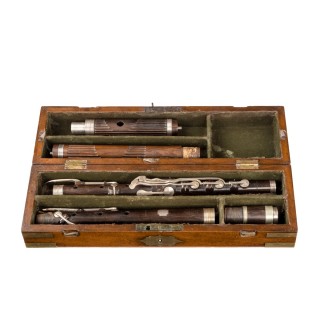 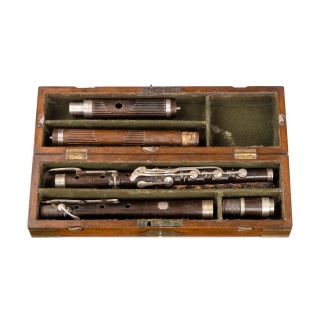 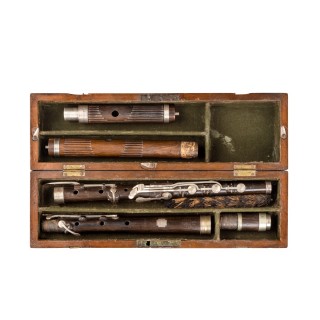 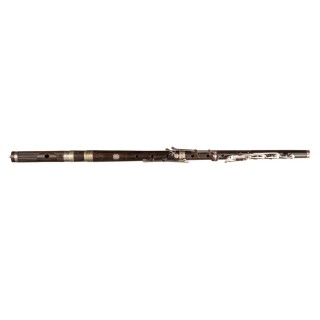 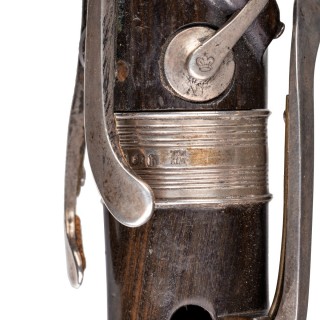 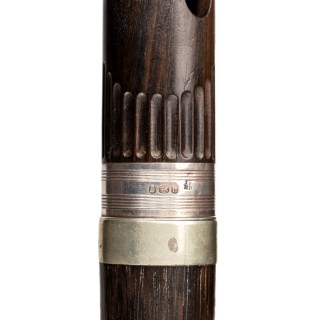 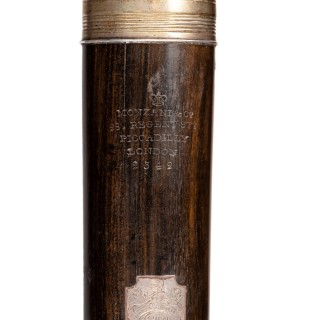 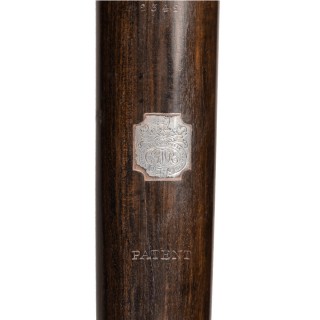 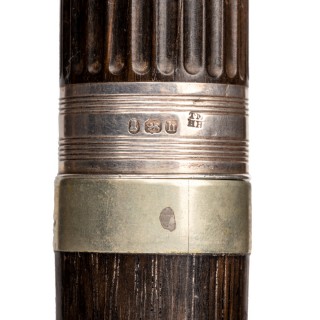 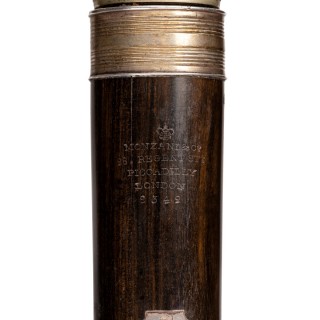 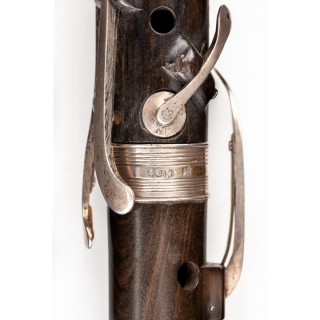 This rare George IV silver mounted crocus-wood flute was made by Monzani & Co for George William Rabett. It is fitted within a purpose made seagoing campaign box with an applied brass plaque engraved with the coat of arms, crest and motto of Geo: Wm Rabett. The silver keys with round covers are stamped with a coronet, while the body is impressed Monzani & Co. 28 Regent St Piccadilly London surmounted by a coronet and numbered 2342 and further inlaid with a silver plaque engraved with monogram G.W.R. within a garter and motto, surmounted by the family crest of Rabett. There is also the original key and an extra mouthpiece c1825. Hallmarks of Tebaldo Monzani and Henry Hill, London, 1823-4.

Born in Verona, Tebaldo Monzani (1762-1839) was a professional flautist, composer, music publisher and innovative instrument maker. Appearing in a London concert for the first time in 1785, Monzani formed a partnership with Giambattista Cimador (1761-1805) and founded ‘The Opera Music Warehouse’ which published, among many others, the operas of Mozart.

Following Cimador’s early death, Monzani formed a new partnership with Henry Hill (1781-1839) as Monzani & Co. specialising in flute making and music publishing. Following Monzani’s retirement in 1829, the firm was continued by his partner as Hill, late Monzani & Co.
George Rabett (1795-1858) entered the Royal Navy inDecember 1810 as midshipman on board Galatea, 42 guns. Soon afterwards Galatea, in company with two other British frigates, engaged three French ships off Madagascar in a ‘long and trying action’ which left 16 of her crew dead and 46 wounded. After further service in the East Indies and Cape of Good Hope, in 1813 Rabett moved to Cydnus, 38 guns, participating in the capture of the United States Privateer Bunker’s Hill and then accompanying the expedition against New Orleans where he joined the army for operations ashore. In the peace, Rabett remained at sea – surviving shipwreck on the coast of Labrador and several months frozen up in the arctic circle – and was made lieutenant in January 1826. He was then appointed to Musquito, 10, in which he participated at the Battle of Navarino on 20 October 1827 and in several other operations during the Greek War of Independence. Returning to England he was made supernumerary in Nelson’s old flagship Victory and given temporary command of the royal tender Onyx serving the young Queen Victoria. However, despite good connections and a long, active and distinguished career during which he was said to have been ‘severely hurt in the execution of his duty’, Rabett never achieved flag rank demonstrating the difficulty of advancement in peacetime. His reputation today largely rests on his widely admired invention, in 1830, of a ‘Substitute Rudder’ to replace a lost rudder at sea although it never seems to have been adopted by the Royal Navy.

Music and dancing played a vital role in maintaining morale and whiling away long hours at sea for both men and officers in the Royal Navy of Rabett’s day. Many captains took private bands on board or sought out and hired accomplished fiddlers to entertain their crews (see Duckworth silver page 46). Officers practised their own instruments – as immortalised by Jack Aubrey’s efforts to master the violin in the Master and Commander series of novels – with the flute being especially popular as it was fashionable and easy to stow. For his own flute, George Rabett chose a top-of-the-range model from a leading London maker, further embellishing it in silver with his family coat of arms and having a purpose made box made to take the instrument to sea. The flute’s date of manufacture suggests Rabett carried it with him at the Battle of Navarino in 1827, the last fleet action of the age of sail.