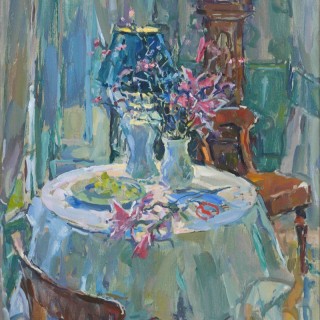 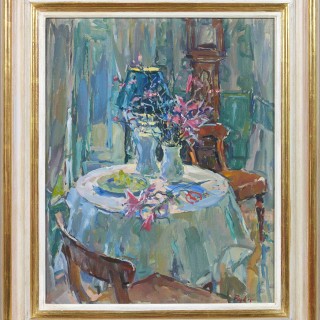 Sue began painting professionally at an early age. Encouraged by her father, Robert Ryder VC, an enthusiastic amateur painter who imbued his daughter with a similar passion, she entered the prestigious Byam Shaw School of Art. There, her tutor, Bernard Dunstan, introduced her to the work of the post- impressionist Edouard Vuillard, whose gentle scenes of intimate interiors, domestic spaces and gardens in soft blurred colours proved a significant influence on her painting style and choice of subject for the rest of her career. Sue was only 18, and still a student, when she first exhibited at the Royal Academy. She married shortly after, spending the next decade juggling the demands of her career with that of her young family, painting both interiors and portraits.

By 1981 her reputation as a portrait painter was such that HRH the Prince of Wales commissioned her to paint Diana, Princess of Wales in her wedding dress. In the ensuing three decades her career has been a blizzard of activity. She has won numerous prizes at the Mall Galleries and has been elected a member of both the New English Art Club and the Royal Society of Portrait Painters, serving the latter as Vice President from 2002 to 2008. Further recognition came in 1997 with a commission to paint HM The Queen from the Royal Automobile Club, in celebration of its centenary.