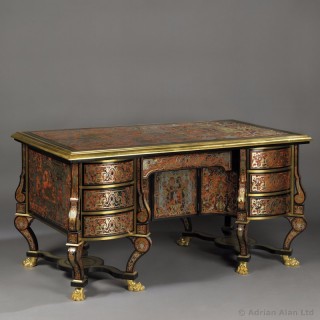 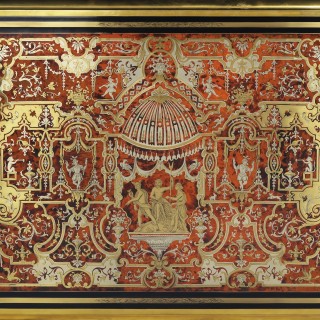 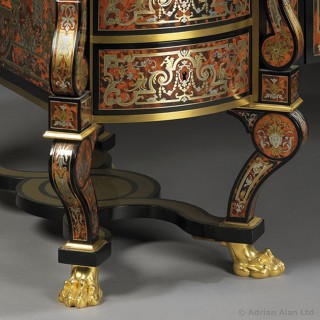 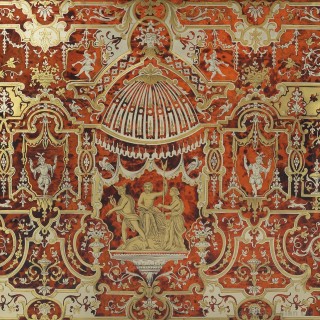 Stamped ‘VF Paris’ between crossed keys on the back of the lock.

This desk form was named after Cardinal Mazarin, regent of France from 1642 to 1661. It is the earliest predecessor of the pedestal desk and is typically supported by eight legs united by ‘X’ or ‘H’ shaped cross stretchers.

The boulle inlay incorporates sophisticated singeries and grotesque decoration depicting grotto scenes of classical gods with attendant monkeys taking the place of traditional fauns. The richly embellished desk top is centred by a classical grotesque depicting Jupiter seated holding a sceptre and carrying fire, (in the Baroque fashion). He is flanked to the right by Venus and Cupid and to the left by Mercury depicted with his petasus or winged hat and holding the caduceus.

The Bureau Mazarin is most popularly associated with the ébéniste du Roi André-Charles Boulle (d.1732) in whose eponymous technique the highest quality examples were produced.

Jules, Cardinal Mazarin, was born on 14 July 1602 at Pescina, Abruzzi, in the kingdom of Naples; he died on 9 March 1661 at Vincennes in France. As a member of the papal diplomatic service (1627-34), he negotiated an end to the War of the Mantuan Succession between France and Spain. From 1634 to 1636 he served as papal nuncio to the French court, at which he became an admirer of Cardinal de Richelieu. He worked for French interests in the papal court and entered the service of France, becoming a naturalised French citizen in 1639 and a cardinal in 1641.

After the deaths of Cardinal Richelieu in 1642 and Louis XIII in 1643, Mazarin was appointed first minister of France by Anne of Austria, regent for Louis XIV, and also took on the direction of Louis’ education. A highly influential advisor to the young King, he helped to train a staff of able administrators. His foreign policy established France’s supremacy among the European powers, effecting the Peace of Westphalia (1648) and the Treaty of the Pyrenees (1659). A patron of the arts, Mazarin founded an academy of painting and sculpture and compiled a large library.

André-Charles Boulle (d.1732), appointed Ebéniste, Ciseleur, Doreur et Sculpteur du Roi in 1672, is among the greatest ébénistes of all time. His fame was such that his name has become synonymous with a whole generic furniture type. In the first decades of the eighteenth century, while still exploiting the common practice of contrasting black ebony against the gold of gilded bronze and brass, silver-toned pewter and often red-coloured tortoiseshell in marquetry, Boulle introduced light, playful designs enlivened with small-scale, lacy designs of playful singeries, garlands of flowers and airy architectural fantasies. First popularised as a technique in his work for the French Court during the reign of Louis XIV, the style has since been associated with the most opulent and expensive designs.

after the model by andré-charles boulle