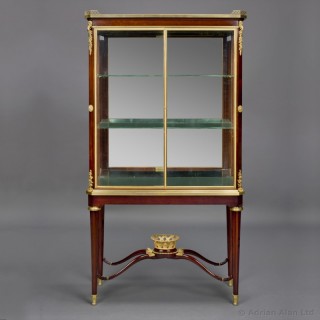 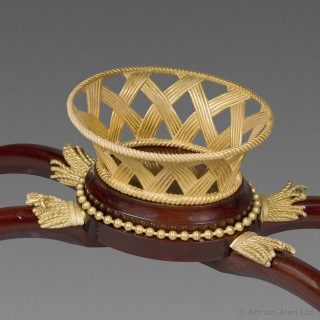 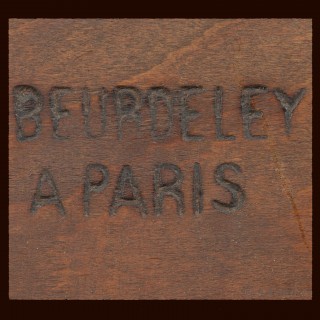 Stamped to the carcass ‘A. Beurdeley à Paris’.

This fine mahogany vitrine has a gilt-bronze galleried top above a glazed square section cabinet with canted uprights and glass door and sides, opening to a mirrored interior with three adjustable shelves. The upper section is supported on a base with fluted tapering legs united by an ‘x’-shaped stretcher centred by a gilt-bronze basket.

The Beurdeley family were a flourishing dynasty of three generations of fine quality cabinetmakers working from 1818 to 1895. The firm was particularly well known for its exceptional metalwork, most commonly basing their designs on important eighteenth century examples. Their mercurial gilding and hand chasing are often of such a high standard that it is difficult to distinguish them from late eighteenth century work.

The founder of the dynasty Jean Beurdeley (1772-1853) was a Burgundian craftsman conscripted into the Napoleonic army. After hostilities ended in 1815 he settled in Paris opening a shop for curiosités and working as a latter day marchand mercier. Initially based on the rue Saint-Honoré, in 1840 Beurdeley moved to the famous Hanover Pavilion situated on the corner of rue Louis-Legrand and boulevard des Italiens, and the business was run by his only surviving son, Louis-Auguste-Alfred (1808-1882). This successful business, which had numerous official commissions including in 1853 the marriage coffer for the Empress Eugénie, was continued by Louis’ son, Alfred-Emmanuel-Louis (1847-1919).

The business continued in its traditional style with very few variations until 1895. Alfred, along with the most famous artists of the period, took part in the 1878 Paris Exposition Universelle, where he won the gold medal. Following on from this glory he went on to open a shop in New York.

His participation in the 1883 Amsterdam Universal Exhibition drew even further attention to his work, and possibly as a result he was awarded the Ordre National de la Légion d’Honneur, France’s highest official mark of recognition.

The incredible quality of each generations work ranked the firm of Beurdeley as pre-eminent amongst Parisian makers of meubles de luxe.