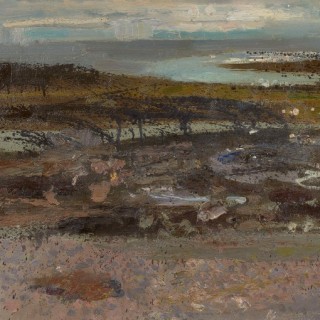 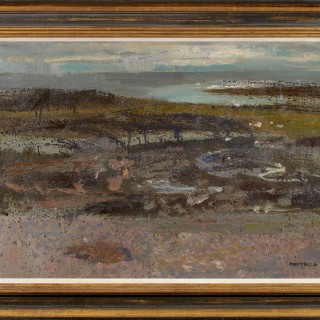 Original Oil on board by Modern Scottish artist Alberto Morrocco.
One of the great twentieth century Scottish painters, Alberto was the master of all genres and need no more introduction here. This particular stretch of coast is painted at Benholm in Aberdeenshire. Morrocco clearly enjoyed spending time there as it was a subject he returned to often, Paisley Museum holds a fine example of the same beach viewed from the water. Not as nice as this one though.
Available at Panter and Hall.

Alberto Morrocco was born in Aberdeen, the son of Italian immigrants. Precocious talent as a draughtsman secured him entrance to Gray’s School of Art in Aberdeen at the tender age of 14 from where, following graduation, he briefly toured pre-war France and Italy. The avant-garde of the twenties and thirties, in particular Braque and Picasso, consequently had a lasting influence on Morocco’s life and art.

Following war service as a conscientious objector in the medical corps, Morrocco spent the rest of his professional life in Dundee, as Head of the School of painting at Duncan of Jordanstone College of Art. Under his skilled direction, the School adopted a characteristic approach to teaching, with the emphasis on observation and drawing. As a teacher, Morrocco was erudite, witty, passionate and hugely respected by his students. Following his retirement from teaching in 1982, Morrocco painted vigorously, producing what is often thought to be his most exciting work.

The University of Dundee awarded Morrocco an honorary doctorate in 1980. He painted all its Principals and, in 1977, the Queen Mother as Chancellor. Spanning thirty years, these portraits are a perfect illustration of how skilfully he adapted the conventions of the formal portrait to the expectations of a contemporary audience.

Morrocco was awarded the San Vita Romano Prize and both the Guthrie and Carnegie Award of the Royal Scottish Academy, where he was elected Fellow in 1962. In addition to the degree from Dundee University, Morocco was awarded an Honorary Doctorate from Stirling University in 1987. He served on the Scottish Arts Council and the Royal Fine Art Commission for Scotland and was appointed OBE in 1993. Morrocco is remembered as a much loved figure in the Scottish art world, both his personality and painting having dominated the scene for nearly half a century.