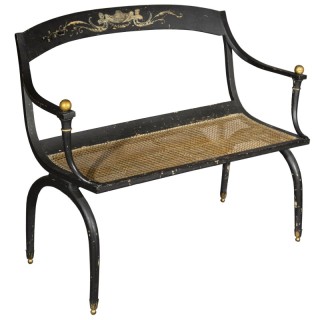 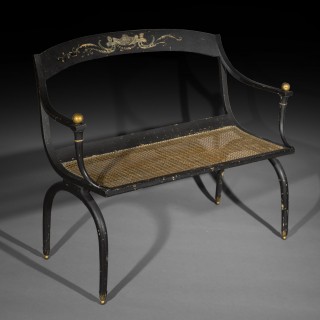 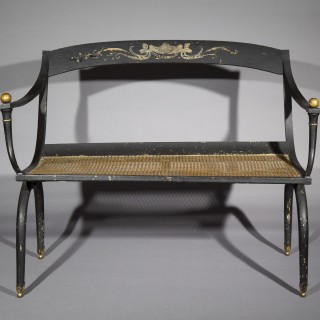 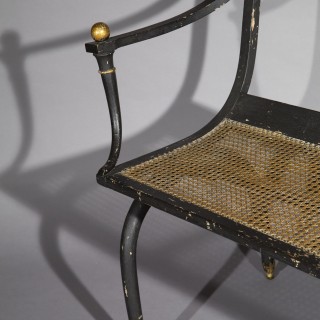 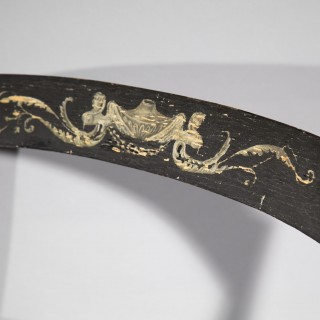 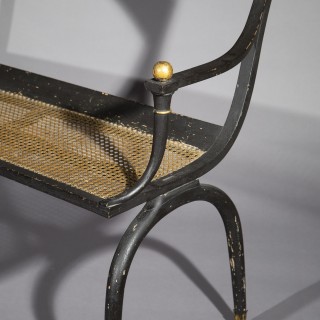 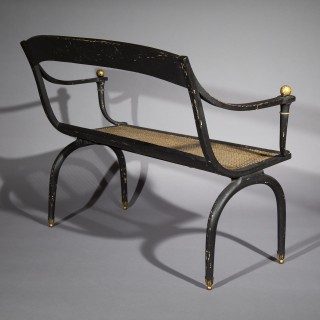 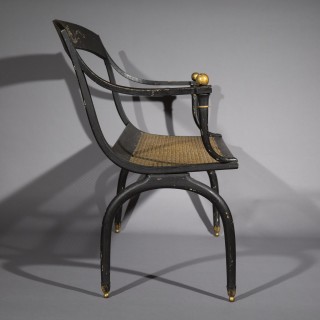 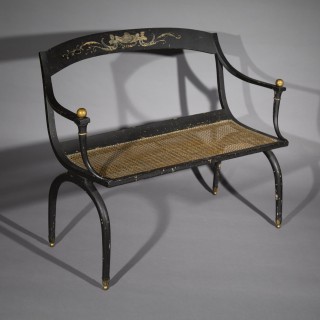 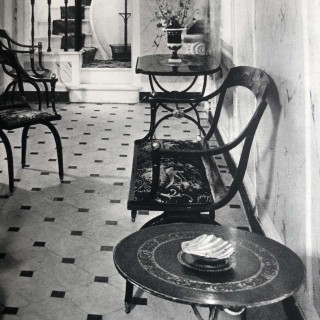 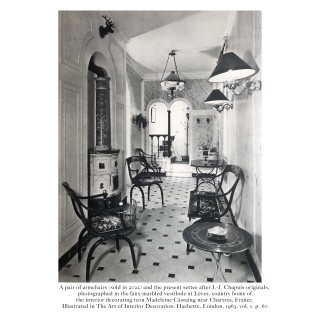 Why we like it
Besides the iconic provenance, this bench is a great example of the 19th century design, informed by classical antiquity. Decorated in the exotic ‘Etruscan’ style to simulate patinated bronze, with its dramatically exaggerated curves, evoking the ancient Roman ‘sella curulis’ – a symbol of magisterial power, this settee is truly a special example of its kind. A squab cushion covered in a fabric complimenting other textiles in the existing interior will complete the look of this super-stylish bench.

Provenance – Madeleine Castaing
Together with a pair of armchairs en-suite (sold by us in may 2022), this settee was photographed in the vestibule at Maison de Lèves near Chartres – country house of the iconic French interior designer and antiques dealer Madeleine Castaing (1894–1992). Madeleine married the heir and art critic Marcellin Castaing – the legendary love of her life – who in the 1920’s acquired a neoclassical gentilhommière at Lèves, that she had been admiring since her days in a convent school nearby, for her to “unwind” as he explained. The house would become one of her masterpieces as she discovered her own vocation for interior design. Extant photographs reveal a number of changes that had been made to the interiors over time. The writer Maurice Sachs once wrote about Madeleine’s passion for her home: “The constant transformations she made to the estate kept her as busy as the world can keep a socialite…”. The contents of Maison de Lèves as well as Castaing’s Rue Jacob gallery and the apartment above were auctioned off by Sothebys in 2004.

Design – Jean-Joseph Chapuis
A suite of white painted and parcel-gilt seat furniture made to this distinctive design was supplied by Chapuis to the Royal Palace at Laeken, near Brussels, circa 1805. One of the armchairs was sold by Phillips, London, 29 April 2014, lot 305 (£31,250). Another armchair, from the collection of Pierre Berge´ was sold Sotheby’s Paris, 30 October 2018, lot 338 (€8,125).