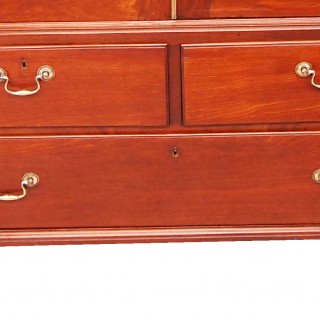 (Linen presses became popular throughout the 18th century and onwards
for as the name suggests storage of the household linen. They normally
came with fitted sliding trays in the interior of the top section designed to
allow easy access to the folded linen. These however have now very often
been removed and replaced by a brass hanging rail allowing storage of
clothes on hangers for modern day living. This particular example is smaller
in size than many that you will see allowing it to be used in a huge range of
different places. It also retains it’s original fitted slides, original brass handles
and original shaped feet.)