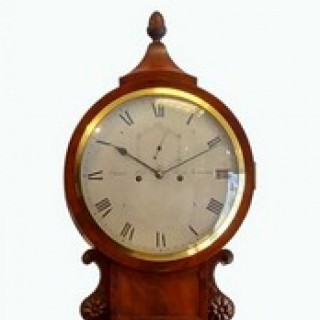 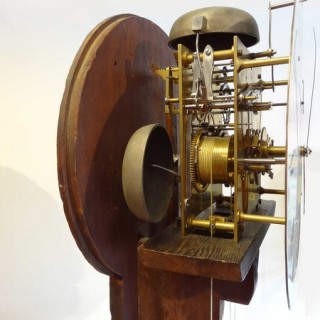 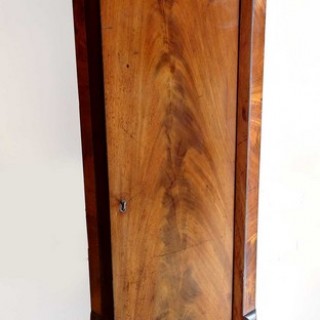 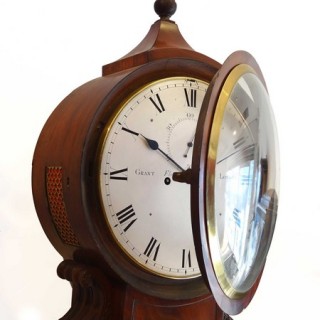 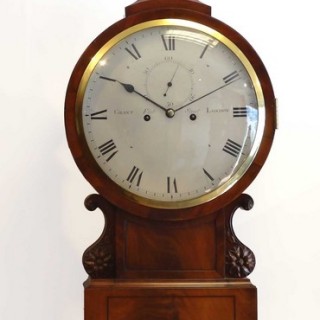 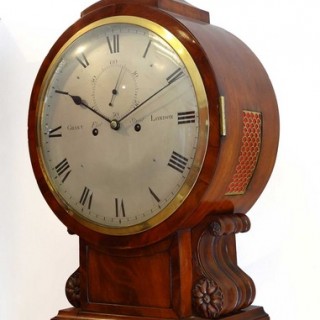 The case of this clock has a drum shaped hood surmounted by an acorn finial over fish scale side frets and large carved volutes. The trunk has a rarely seen full length ‘invisible’ door with hidden hinges, the outer edge following the ebony line inlay, replicated on the matching base.

The superior weight driven movement has wheel-work of the highest quality of its period, with maintaining power and deadbeat escapement, the escape wheel with five crossings. It rings the hours on a pair of bells, the hammers being released at precisely the same moment using an ingenious pivoting linkage connecting the two hammer arbors.

The wooden rod pendulum has an engraved rating nut and T-bar suspension, and a pair of beat adjustment screws on the pendulum by the crutch.

The well-engraved flat 13-inch silvered dial has a strike / silent lever above XII. The subsidiary seconds indication is bold, with no hand recoil as a result of the dead-beat escapement. The whole of the wood surround complete with brass bezel is hinged. It is fitted with convex glass.

There were two makers with the name John Grant – father and son.

By 1793 he was working at 75 Fleet Street and took Henry Baker as an apprentice. In 1794 he advertised in a local trade directory as a watchmaker at 75 Fleet Street. John was involved in the early development – pre 1800, and use of the lever escapement. In 1809 he took his son also called John Grant as an apprentice. The Collection of the Worshipful Company have at many examples of his work, courtesy of a donation from his son, John junior.

For some time in the early 1790’s they traded as Cummings and Grant who succeeded them and then became John Grant.

The first census in 1841 has him living in Fleet Street, John Grant (45) watch and clock maker, Annabella Grant (50) and Mary Grant (45). This census did not state the relationship between householders.

Before the 1851 census John had moved to Cookham, Berkshire where he remained for the rest of his life. John Grant (55) retired watchmaker, wife Ellen E. (50) plus a nurse, a house servant and a groom.

By 1871 the address has a name;- The Ferns, Cookham, Berkshire. John Grant (75) is now a widower and retired watch and clock maker although still working as a pawnbroker, living with his niece Fanny Troughton (44), plus a cook and a housemaid.

In the 1881 census John was still living at The Ferns, Cookham, Berkshire. John Grant (85) Widow Retired Watch & Clock Maker his niece Fanny Troughton (53)and three servants; a cook a domestic servant and a groom.

Undergoing a full overhaul and to be guaranteed for 3 years.