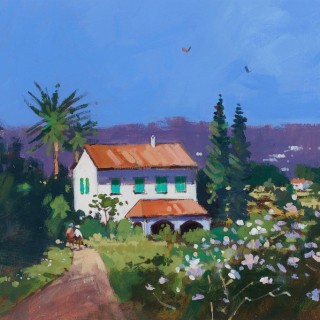 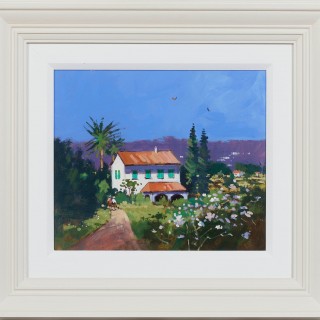 James Orr was a landscape artist whose inspiration came from the west coast of Scotland and the beaches and vineyards of Mallorca.

He grew up in the Townhead and Springburn areas of Glasgow. The youngest son of a postman and a mother who was a tireless campaigner for the Temperance movement, his early life was culturally sparse. Apart from a bible, there were no books in the family home and there were no paintings or prints adorning the walls of their tenement flats.

When James discovered the local library, his life blossomed leading to a lifelong love of reading and learning, although his mother regarded his library books as mere dust collectors.

While he showed an aptitude for drawing, he was not encouraged by his family to pursue it. He left school aged 14, beginning working life as a telegram boy and after national service with the RAF, he became a sales rep selling carpets to menswear to corsetry. His time on the road as a sales rep gave him access to all of mainland Scotland and the islands, and during this period, he was able to experience and absorb much of the visual beauty of the Scottish landscape.

After his national service, he decided to emigrate to the USA, and bought his £10 one-way ticket. However, days before he was due to leave, he met Betty Inglis and all thoughts of emigrating evaporated. They were happily married for 41 years, until Betty’s death in 1996. A shared sense of humour underpinned their successful marriage. Betty would say of their beautifully balanced relationship, “James worries about the cost of living and I worry about the state of the planet.” They had one daughter, Jacqueline, who is also an artist.

James Orr’s work commitments meant relocation from Glasgow to Inverness and subsequently to Prestwick in Ayrshire. Ever-active, he obtained his glider pilot’s licence and spent many happy Saturdays surfing the thermals over Lossiemouth. He also learned to sail, was a good, but intermittent, golfer and also a talented photographer. The move to Prestwick in 1969 meant the end of his gliding days and he started to attend local painting classes and by the mid 1970s was attending life drawing classes at the Glasgow School of Art under the tutelage of John Boyd RGI and William Crosbie. By the late 1980s, he was good enough to begin painting on a full-time basis and forged a very rewarding career as an artist.

While James Orr is known for his vibrant paintings, he was a talented draftsman and drawing was of great importance to him. He eschewed reliance on photographic reference material and there was always a sketchbook and pens and pencils by his side when he was out travelling. He was also a fine watercolourist.

Through exhibiting at the various visual arts societies in Scotland, such as the RGI and RSA, he became inspired by the work of Scottish artists such as Alexander Goudie, Archie Forrest, Sandie Gardner and Alberto & Leon Morrocco. It is therefore ironic, given his avid interest in Scottish painting, that he was initially more influenced by English artists such as Edward Seago, Bernard Dunstan and Ken Howard. His early paintings are very tonal and subdued in colour; more akin to an English style of painting. However, travels to Mallorca, France and Italy brought a Mediterranean panache to his palette and the vibrant colour started to appear more frequently in his work.

A modest man when it came to his own achievements, his work is held in the collection of HRH Duke of Edinburgh and in many private collections across the world. He won several awards for his work, including the RGI’s Royal College of Physicians & Surgeons of Glasgow Award. His paintings have given great pleasure to many people.

Renowned for his kindness and generosity, he also nurtured many budding artists and gave his time generously through artist demonstrations for many art clubs across Scotland.

He had an incredible drive and zest for life and he maintained great pace belying his age. He had many friends from different spheres and loved socialising with them. Just a few weeks before his death, he was still swimming with his friends twice a week, keeping up with his artist friends’ group, attending life drawing classes, painting, delivering and uplifting paintings, visiting friends and family and much, much more.

However, first and foremost, he was a family man; he was devoted to his family and supporting and encouraging them when necessary. He took great interest in the lives of his nieces, nephews and daughter taking them ice skating and teaching them how to swim. In particular, he devoted much time to his daughter, instilling within her a love of art and encouraging her career wherever possible.

James, who died in Kintyre, is survived by his daughter, Jacqueline.

Obituary from The Herald January 2019