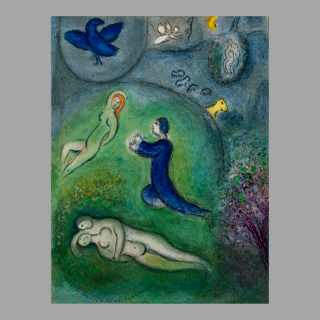 Chagall’s “Daphnis and Chloé” is one of his most accomplished works and we are pleased to offer for sale four pristine images from the series. They are in excellent condition, the colours as fresh as the day the lithographs were issued.

Edition: Proofs aside from the edition of 250, on Arches wove paper. Created at Mourlot Studio Paris and published by Tériade.

PRICE IS FOR EACH FRAMED PRINT