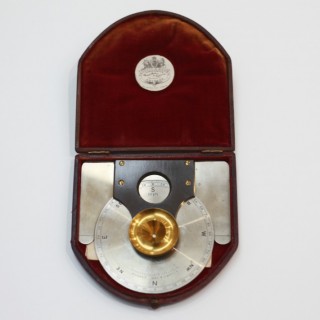 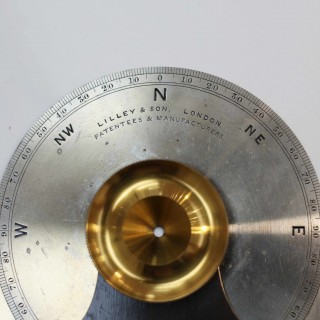 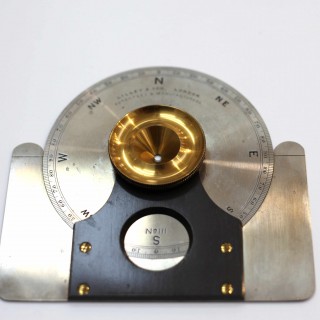 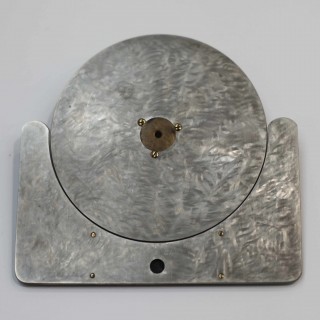 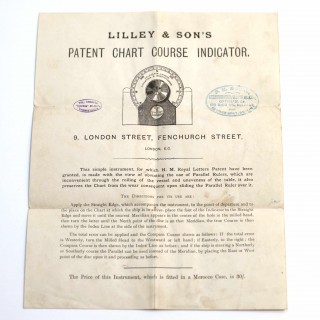 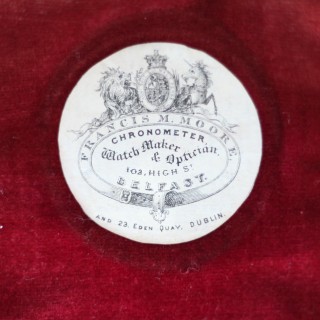 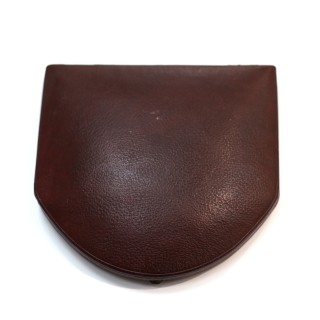 Complete with its original morocco leather velvet lined case, this maritime navigational chart instrument is comprised of a straight edge and a 360 degree protractor above which can be rotated by means of the knurled knob to the centre. The protractor is engraved to Lilley & Son, London. Patentees & Manufacturers and the case has the retailers trade label for Francis Moore, Chronometer, Watchmaker & Optician, 102 High St Belfast and 23 Eden Quay, Dublin.

The directions for its use are provided with the original instructions which remain with the instrument.

“This simple instrument for which HM Royal Letters Patent have been granted is made with the view of obviating the use of parallel rulers which are inconvenient through the rolling of the vessel and unevenness of the table, it also preserves the chart from the wear consequent upon sliding the parallel rule over it.

The directions for its use are:

Apply the straight edge, which accompanies the instrument to the point of departure and to the place on the chart at which the ship is to arrive, place the foot of the indicator to the straight edge and move it until the nearest Meridian appears in the centre of the hole in the milled head, then turn the latter until the North point of the disc is on that Meridian, the true course is then shewn by the index line at the side of the instrument.

The total error can be applied and the compass courseshewn as follows: If the total error is Westerly, turn the milled head o the Westward or left hand; if Easterly, to the right; the compass course is then shewn by the index ine as before; and if the ship is steering a Northerly or Southerly course the parallel can be used instead of the Meridian, by placing the East or West point of the disc upon it and proceeding as before.”

The patent for this instrument is considered to have been lodged by Lilley in 1883 which would also line up with the Francis Moore’s trading addresses on the case. He moved to the stated premises in Belfast in 1880 after having traded from alternative addresses from 1859 and the Dublin branch provided was opened in 1882.

The manufacturing company, John Lilley & Son was established in 1812 by John Lilley. His son (also John Lilley) was apprenticed and brought into partnership in 1846 and the company were established enough to receive appointments from both the Royal Navy and The East India Company. The founder died in 1859 but his son continued to trade under the original name and took out two patents during the 1850’s and 1860’s relating to improvements to compasses. In 1865, the company moved to the London Street address. John Lilley Junior died in 1881, leaving the business to his son George Charles Lilley and the firm is documented as being involved in chronometer trials at the turn of the century.

In 1911, George Lilley went into partnership with John Wilson Gillie to form John Lilley & Son Limited and in 1943 after entering into volumtary liquidation it moved to form a new company of John Lilley & Gillie Limited. The company still exists today as a manufacturer of marine instruments