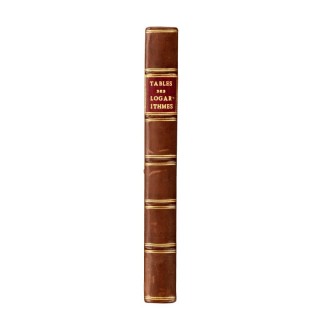 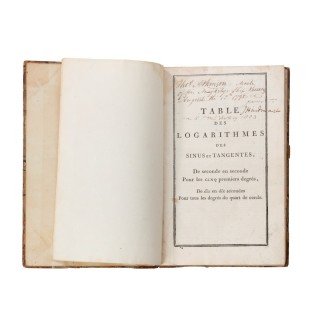 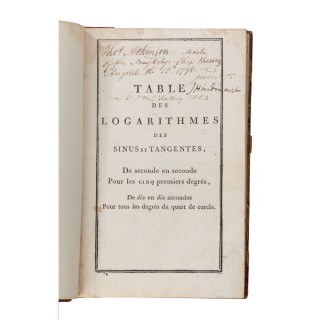 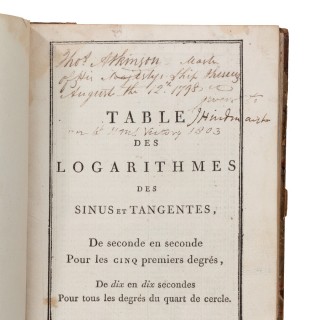 This volume of logarithms was seized as booty by Thomas Atkinson, sailing master of Theseus, 74 guns, following the Battle of the Nile. Designed to assist in navigation and recently published by French mathematician Jean-François Callet, the volume was a valuable item of enemy intelligence for a Royal Navy sailing master. Atkinson subsequently gifted the book to John Hindmarsh, probably on Hindmarsh’s promotion to lieutenant on board Victory on 1 August 1803.

Thomas Atkinson (1767-1836) entered the Navy in 1793 as an able seaman, suggesting previous experience at sea. Qualified as master in 1795, he joined Emerald, 36 guns, seeing action at the Battle of Cape St Vincent on 14 February 1797, following which he transferred to Theseus. At the Battle of the Nile, Theseus took the surrender of the French ship Artimise and, in the days afterwards, assisted in taking under tow the prizes Heureux and Mercure during which this book was likely secured by Atkinson on 12 August 1798 (the same day Cooper Willyams was also sketching in the bay, see his watercolour on page 30). Theseus sailed from Aboukir Bay in convoy three days later. Subsequently Atkinson witnessed the siege of Acre, during which he was wounded – and his captain, Ralph Miller killed – in an accidental explosion of powder in the ship. Known and admired by Admiral Lord Nelson, who described him as ‘one of the best Masters I have seen in the Royal Navy’, in 1801 Atkinson transferred to Nelson’s flagship San Josef (see page 16). Two years later he followed the Admiral into Victory steering the ship into immortality at the Battle of Trafalgar.

John Hindmarsh (1785-1860) entered the Navy as a boy in 1793, seeing action at the battles of the ‘Glorious First of June’ and the Nile where he distinguished himself as a thirteen-year-old midshipman fighting in Bellerophon, 74 guns, in which his father was also a gunner. Nelson referred to Hindmarsh’s ‘conduct this day five years’ when he promoted him in person on board Victory on the anniversary of the battle. Hindmarsh’s action-packed career continued long after Trafalgar – which he experienced in Phoebe – so much so that he was one of only two recipients of the Naval General Service medal entitled to seven clasps. In 1836, Hindmarsh was appointed first governor of South Australia then, in 1840, lieutenant- governor of Heligoland.