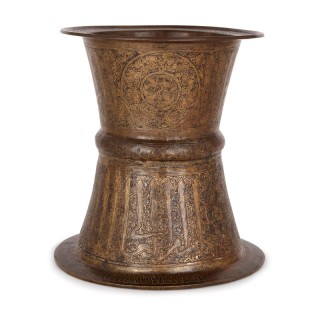 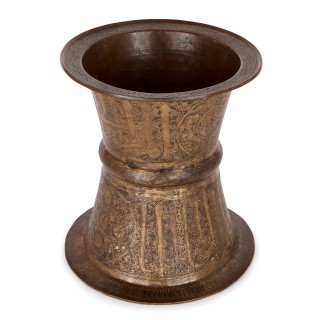 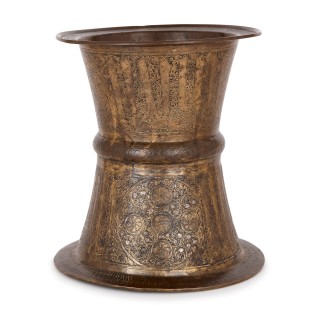 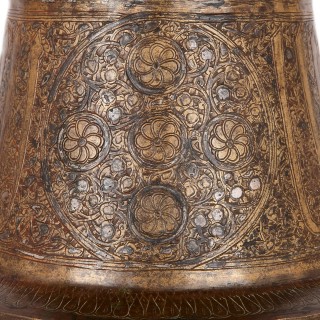 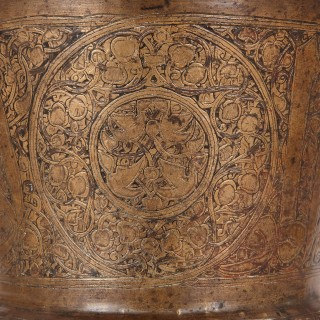 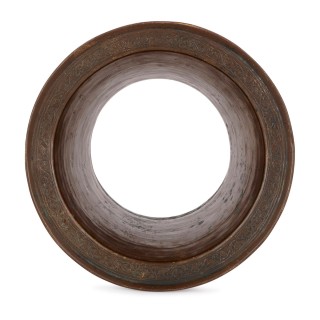 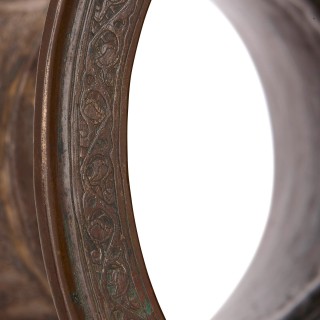 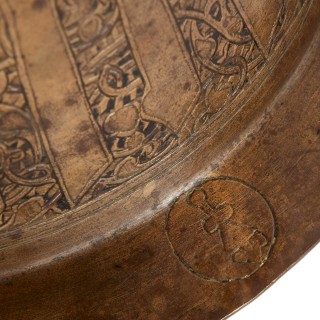 This exceptionally beautiful and rare silver-inlaid brass tray stand dates from the medieval period, when the Mamluks ruled Egypt and Syria (1250-1517). The Mamluks originated as slave-soldiers, who served the Muslim caliphs and Ottoman Empire. With time, the Mamluks became a powerful military caste, and they managed to take control and establish themselves as rulers of certain areas within the Abbasid caliphate. The Mamluk dynasty commissioned great works of art and architecture, particularly in Cairo, the capital city of Egypt, which was described in the 14th Century as ‘the centre of the universe and garden of the world’ (Ibn Khaldun, 1382).

This tray stand is of biconical form, with a raised central band and flared base and rim. It is decorated with scrolling vines, overlaid with Thuluth inscriptions and roundels. On the lower body, the roundels contain floral motifs, and in the upper, stylised depictions of birds. The Thuluth inscriptions praise the patron, referring to him as ‘The High authority, the Lordly, the Possessor’, and ‘the learned’. The underside of the rim is engraved with a heraldic medallion, possibly the patron’s symbol.

In the Middle Ages, when this piece was made, this item would have stood in a grand interior, supporting a tray full of fruit and fine food. The owner of this lavish piece—which still bears traces of its original silver inlay—would likely have been an Amir (prince) or some other important figure who was close to the Sultan in the Mamluk court.

Only a handful of these Mamluk tray stands have survived, so this is a truly one-of-a-kind piece, which is both incredibly beautiful and historically important.