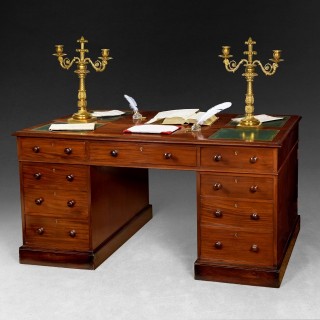 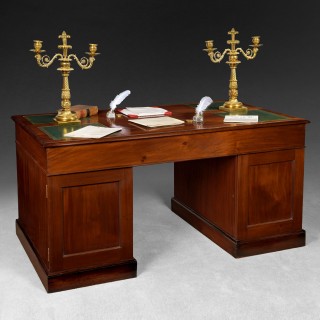 An impressive large mid-19th. Century Mahogany double sided or Partners’ Desk, the top with four gilt tooled green leather inset panels, the frieze with three drawers and raised on two pedestals with cupboards to one side and drawers to the other terminating on plinth bases. The drawers all retain the turned wooden knobs and there is an original metal label for Powell & Powell, Bath, Upholsterers & Auctioneers, Removals & Warehousing.

These illustrious furniture specialists were started in 1819 as cabinetmakers and upholsterers at 18 Old Bond Street and later at the City Auction Mart in Quiet Street, Bath. They had an enviable reputation for supplying high quality furniture and carpets from their original four storey building. Later still they became owners of Chick’s Depository in Paddington, London.