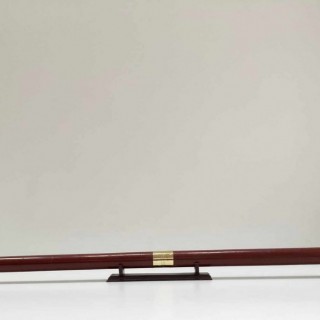 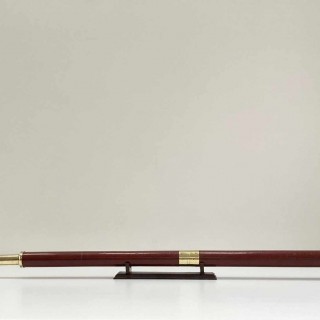 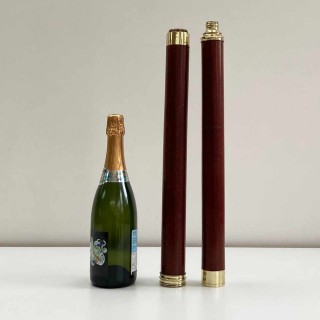 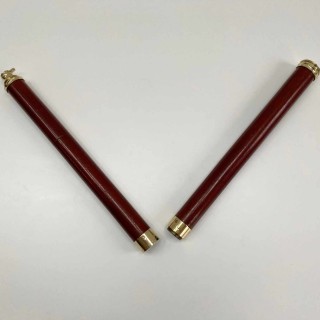 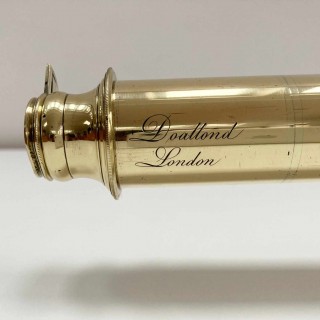 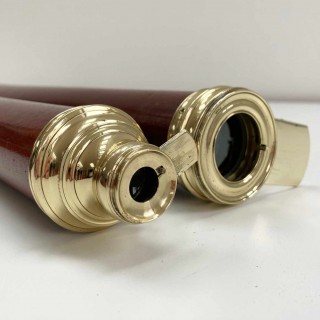 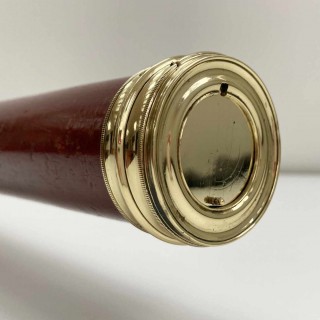 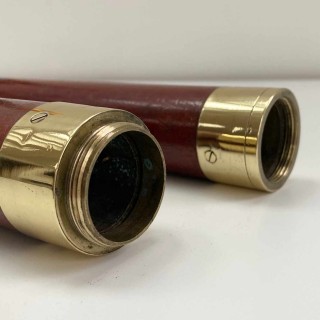 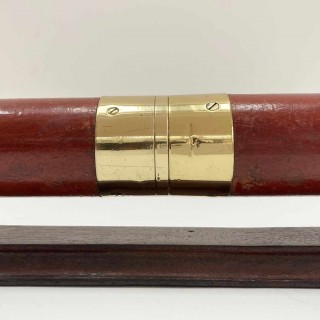 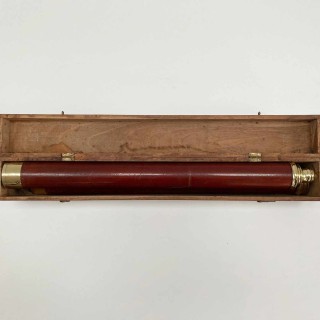 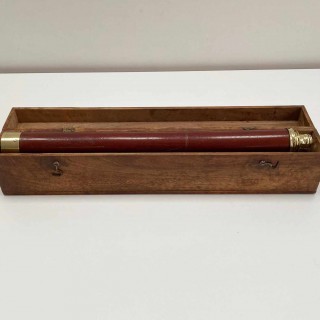 This unusual telescope is comprised of a two part barrel with brass threaded collars that can be screwed together. It has a four lens combination draw tube without backstop allowing it to be pulled directly from the barrel as was common during the period and is completed with a period bulbous type eyepiece with integrated dust-slide. The inch and a quarter diameter objective lens is integrated into the dust-slide which in turn screws into the main barrel.

Besides the design, the telescope is hugely interesting for the engraved mis-spelling of “Doallond London” rather than Dollond, a mistake that makes it clear that this instrument was constructed in direct infringement of John Dollond’s famous patent rights for the achromatic lens.

In 1758, John Dollond and his son Peter received a patent for the invention of the achromatic lens which was partly funded by the instrument maker Francis Watkins. This funding provided for a partnership arrangement for the sale of this groundbreaking invention which solved the issue of both chromatic and spherical aberration encountered in telescope lenses.

It was shortly after this event that the question of John Dollond having been the first to have succeeded in the invention of this lens was raised. The industry as a whole were rightly put out by the protection offered by the King’s patent and Watkins was shortly informed that a Chester Moor Hall (an amateur scientist and lawyer by trade) had already been experimenting in this field and had procured such lenses made to his design by the trade almost twenty years earlier. Seemingly, a man of high moral standards, the partnership soon became less enthusiastic, Watkins must have felt duped by the Dollond’s claim and worked hard to avoid the Dollond family taking legal action against the instrument maker, William Eastland for ignoring the Dollond’s rights of exclusivity.

It took two years following the death of John Dollond in 1761 for his son Peter to make attempts to dissolve the Watkins partnership. His continuing development of the achromatic lens and lack of involvement from his business partners is cited as being the reason for his dissatisfaction with the situation. In addition to the arduous experiences of Watkins over this issue, Peter Dollond had also served infringement notices on numerous other London instrument makers such as Martha Ayscough (James Ayscough’s widow), James Champney and Henry Pyefinch

The industry as a whole remained unsatisfied with the outcome of Dollond’s initial actions and it was followed up with a petition to the King by the Spectacle Maker’s Company requesting for the patent to be annulled but Dollond ultimately succeeded in defending his right.

So emotive was this issue that ten years later Dollond attempted to exonerate his father’s name with the Royal society who had bestowed the Copley Medal on John Dollond for his invention. With suggestions coming from overseas that the accolade should have been presented elsewhere, Dollond formulated a defence which was presented to the Society in that same year. Sadly for Peter Dollond, it excited a response from his brother in law, the famous Jesse Ramsden who in turn commanded a defence for the position of Chester Moor Hall as the originator of the achromatic lens. The ensuing war of words led to Jesse Ramsden seeking first hand evidence from the original defence, namely Watkins and Smith and given their continuing displeasure with the events of the mid-1760’s both seemed more than willing to provide their opinions.

Due to the lack of publication of entire Royal Society papers and the seeming success of Peter Dollond’s legal cases, the invention of the achromatic lens has forever been associated with John Dollond but the minute attention to detail given to the subject by Brian Gee (Francis Watkins & The Dollond Patent Controversy) prior to his death seems to provide a weight of evidence in favour of Chester Moor Hall.

Given the vigour with which Dollond commanded adherence to his Patent rights it would seem strange that anyone would attempt to manufacture forgeries of this telescope, however, the famous Fleet Street instrument maker, Benjamin Martin is known to have advertised telescopes under the “loosely” associated name of Dalond or Dalone which he sold in various foot lengths. Like others. Martin never obtained a licence to sell Dollond’s patented invention but strangely, he also seems to have avoided the wrath of his competitor even though he certainly voiced and publicised his disdain for Dollond’s actions. It cannot be proven that this instrument is one such example of Martin’s manufacture but owing to the quality, the style of design and a barrel length of three foot exactly, it bears some similarities to those examples present on the market during the period of enforcement. The sectional barrel is also a peculiarity which was known to have been produced by one of Dollond’s legal victims, Henry Pyefinch who traded from 1763 – 1779

A hugely interesting and rare telescope which brings to life one of the most famous controversies of Eighteenth Century scientific endeavour.