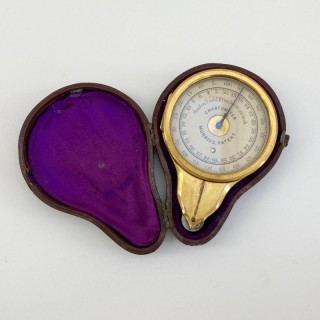 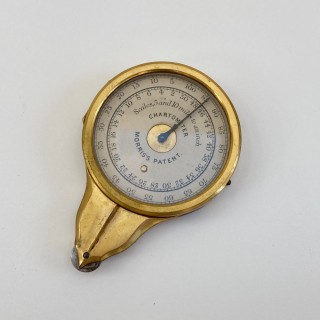 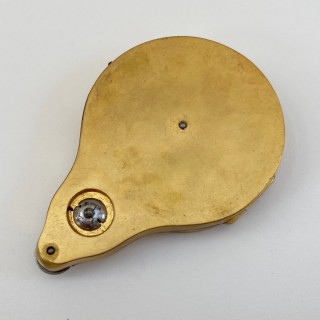 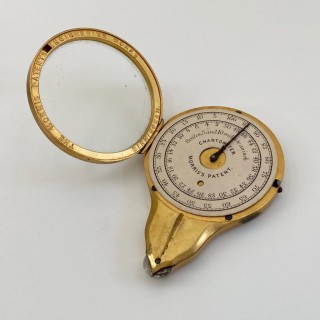 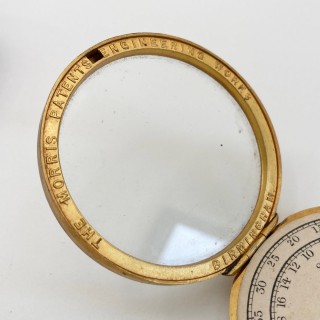 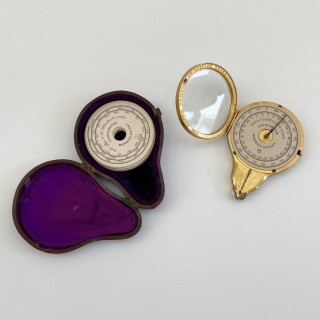 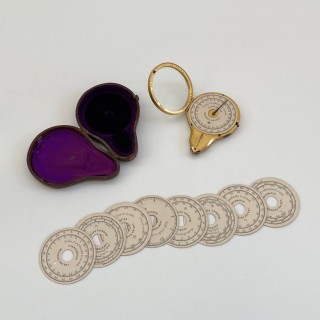 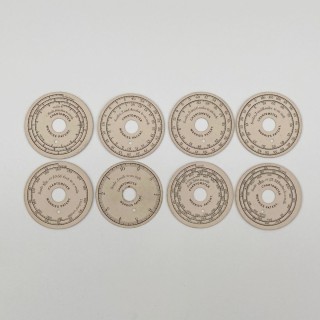 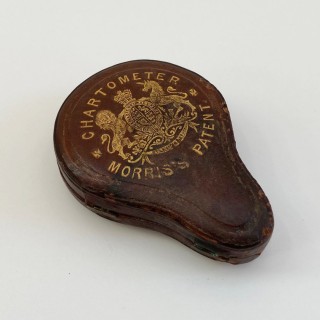 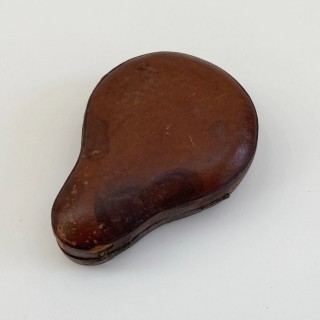 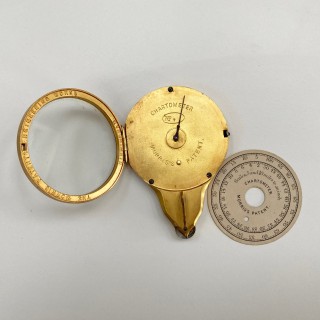 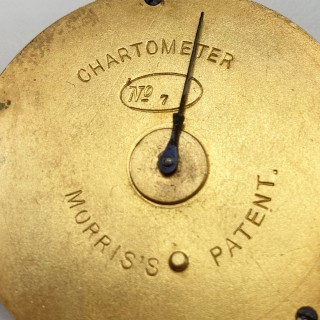 For sale, a mid Victorian Morris’s Patent Chartometer in original case and complete with all nine card scales.

This fascinating gilt brass measuring instrument is comprised of scale plate with blue steel pointer covered by a hinged glass front embossed to the back bezel with the company’s name, “The Morris Patents Engineering Works, Birmingham”. The scale dial is geared to a smaller wheel at the pointed tip of the instrument and the divided scale is provided in the form of a number of card discs which are interchangeable depending on the user’s requirements. All are contained in a morocco leather case, lined with purple silk and velvet and a gilt tooled lid stating, “Morris’s Patent Chartometer” and with Royal insignia to the centre.

The blank scale plate for the card dials is further engraved with Morris’s Patent Chartometer and the serial No: 7. The very early production number allows us to date this rare instrument to the very first year of production and is perhaps the earliest extant example known to exist.

The original description of use for this instrument from Morris is provided below:

“The only instrument that measures and registers distances on maps, plans, scaled drawings etc, and that is adapted for various scales. By guiding the small steel wheel along any route on a map, the hand registers the actual distance in miles, yards etc, according to the dial in use and the scale of the map, which should correspond. To deal with a map of a different scale, the glass front is opened by pressing a spring; the dial removed, and another corresponding to the fresh scale slipped into its place. A set of dials adapted to the scales of all Ordnance maps, and the usual scales of travelling maps etc, is contained in a recess of the leather case, beneath the instrument.”

The charts which are all present and in fine condition provide measurements according to the following:

“To Edward Russell Morris, of Oakhill Park, Hampstead, in the County of Middlesex and of Birmingham, in the County of Warwick, Engineer, for the invention of “improved pocket instruments for measuring and registering distances.”

He is also listed as having been a partner in the firm of Charles Powis, Carter and Morris in the 1870’s although in 1880 he left presumably to focus on the success of The Morris Patents Engineering Works in Birmingham, he had by this time, won a silver medal at the 1875 Manchester Exhibition for his chartometer and also became a member of The Institute of Civil Engineers.

He is further known to have invented a “Morris Indicator Diagram Calculator and also a smaller example of the chartometer which he curiously named the “Wealemefna”. A name which he devised in order to outwit imitators of his inventions.

The idea for Morris’s chartometer was certainly not a new one although it was an ingenious and very successful development of the Opisometer. A more difficult device which had a roller attached to a screw thread. This would be rolled across the map area requiring to be measured and the roller would wind across the thread as it was measuring the map. When completed, the roller would wound back to its first position across the map scale at the bottom and the distance could then be deduced. Morris’s simple idea gave the user an immediate reading at the point of measurement by simply viewing the scale and his simple but effective inventions saw great success.