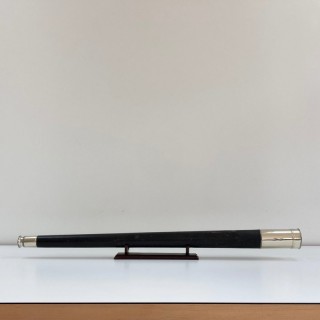 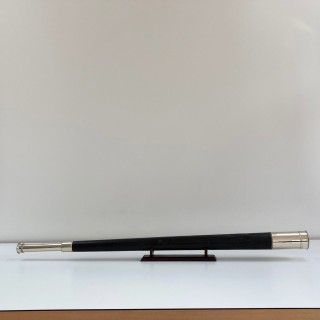 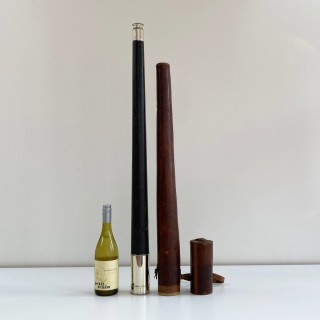 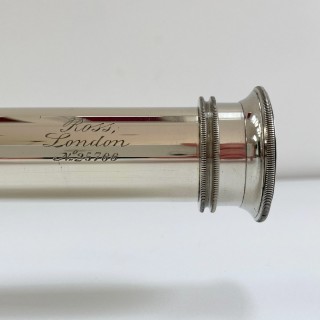 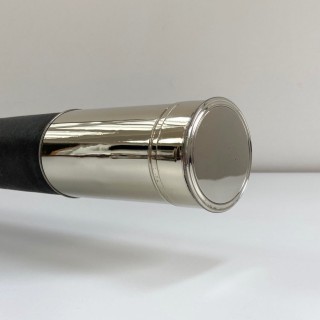 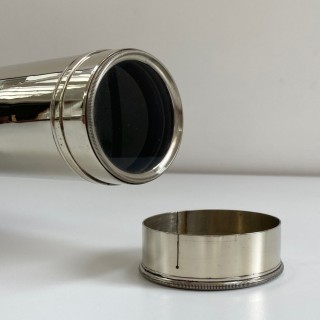 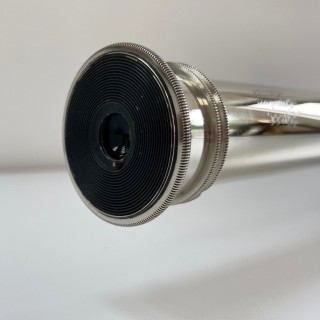 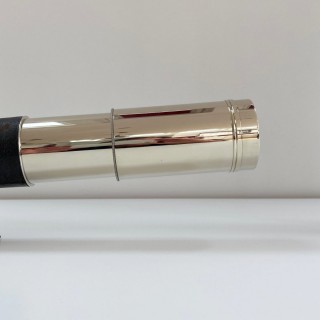 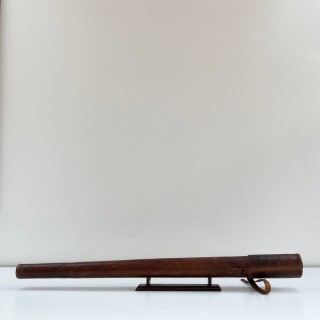 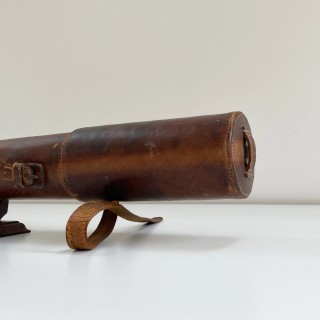 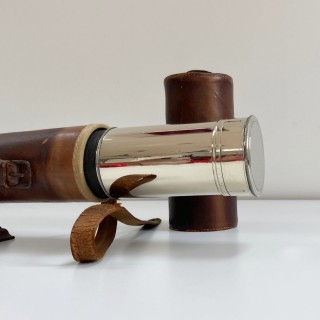 In remarkable condition, this example measures 92cms when closed, 107cms extended and has a two inch objective lens. The eyetube is superbly engraved to “Ross, London” with a serial number of 25766.

The tapered barrel is covered in black leather with nickel plated brass fittings throughout, it also comes complete with its original lens cap, dust slide to the eyetube, sun shield and its original leather and suede lined travel case.

This beautiful telescope is in astonishingly good condition and I suspect has lived most of its life within its case. It is also highly unusual to find such an example with its original case. Perhaps the best example I have seen for some time and created by a very well respected maker of optics.

The maker, Andrew Ross was born in 1798. His Father John was a staymaker based in Fleet Street but given the proliferation of top flight scientific instrument makers surrounding him during his upbringing, it is perhaps unsurprising that he graduated towards the industry and was apprenticed in 1813 to the London maker John Corless for the obligatory seven year period. As an interesting aside Corless had business associations with a Michael Dancer who was a relation to the latterly famous maker John Benjamin Dancer, both he and Ross were later to make their respective names in the field of microscopy.

Ross left Corless in 1820 and spent three years working for a mechanical engineer before taking up a position with the famous firm of W&T Gilbert. He eventually set up his business from 5 Albermarle St in Clerkenwell in 1830. Often considered a “jobbing” lens maker (albeit a very adept one) until the latter part of the decade, the Transactions of The Society of Arts would suggest differently whereupon in 1831 he was awarded The Golden Isis medal for his dividing engine. Perhaps unsurprising given his experience under the Gilbert business. He is also known to have made his first signed microscope in 1832 for the botanist, W. Valentine, the same design being presented again to the Society of Art in 1832.

The developments in microscopy were trail blazed during this period by Ross, Hugh Powell (of Powell & Lealand) and Joseph Smith (ex Tulley and later of Smith & Beck or Smith, Beck & Beck) and Ross’s skills as a philosophical instrument maker are largely overlooked in preference to his involvement in this discipline. Instruments with Ross’s early address are also seldom seen but were certainly manufactured as it is unlikely that he would have survived on the sale of microscopes alone.

In 1839, Ross moved to a new address at 33 Regent’s Circus and the business was renamed shortly after to Andrew Ross & Co owing to his involvement with the wine merchant and amateur scientist , Joseph Jackson Lister who designed lenses to cancel out chromatic aberration in microscope lenses just as the Dollond’s had done in the Eighteenth Century for telescopes. In 1841, Ross also received another award from The Society of Arts for his invention of the Sphereometer.

The relationship with Lister lasted only until 1842 whereupon Ross moved to 21 Featherstone Buildings in Holborn and continued (under his own name again) to develop improvements in microscopes whilst also maintaining a reasonable trade across all scientific disciplines.

By 1847, the company had moved to 2 Featherstone Buildings and it was from this address that Ross presented his microscopes at The Great Exhibition of 1851 subsequently winning the Gold prize. In the same year he also employed JH Dallmeyer, an equally adept optician who eventually married Ross’s daughter. Dallymeyer was to dominate the Ross business in regards to astronomy during the 1850’s whilst Ross’s son Thomas took control of the fledgling photographic arm.

Upon Ross’s death in 1859, the business was separated in a two thirds versus one third share in favour of Thomas and they subsequently parted company although Ross demanded in his will that the two should remain partners for at least twelve months following his passing.

Thomas Ross continued the business for a further ten years until his death in 1870 whereafter the business was left to his widow. Within two years, Mary Ann Ross is listed as marrying a John Stuart and together they continued to run a successful business and win awards for their optical developments under the new moniker of Ross & Co. The company was incorporated in 1897 and went on to acquire a Royal Warrant in 1911, it also provided instruments to the British military throughout both World Wars. It continued until an eventual merger in 1948 with Barnet Ensign. The newly formed Ross Ensign was itself consumed in 1969 by Ayling Industries Group.