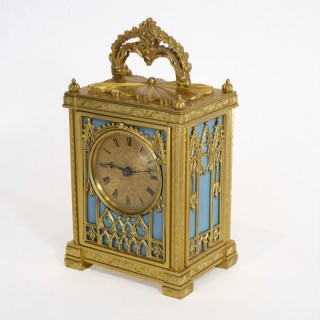 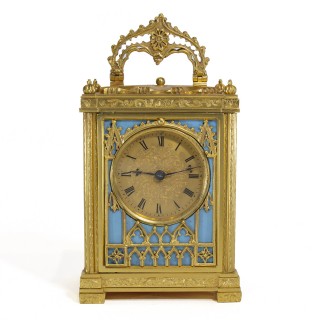 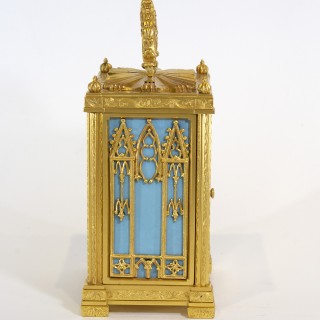 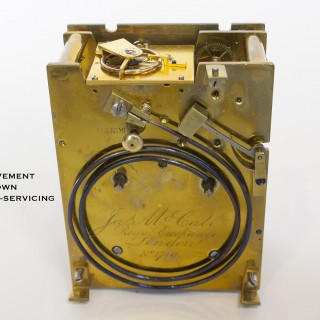 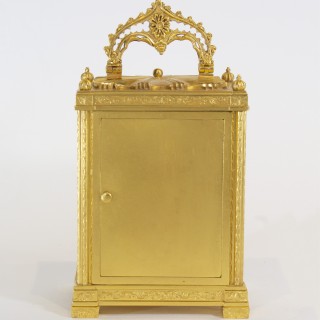 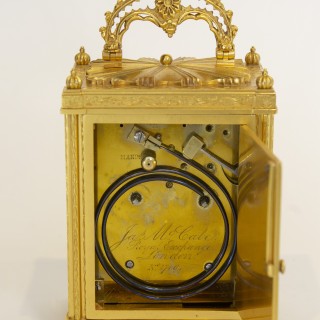 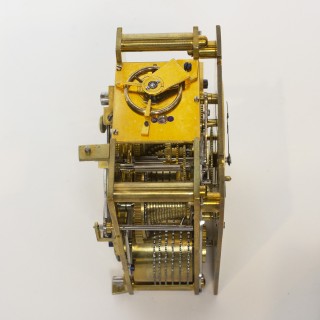 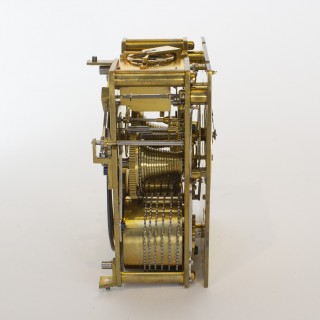 James McCabe produced more carriage clocks than any other English maker, all of the finest quality. This one is numbered 1749, making it one of his earlier recorded serial numbers. English carriage clocks were usually of much larger size than the later French clocks, incorporating the large fusees. This is a rarely seen miniature twin fusee carriage clock.

This clock is featured by Fanelli, J., Terwilliger, Ch. in their 1987 book, A Century of Fine Carriage Clocks. Fanelli describes it as undoubtedly one of the rarest clocks in the book, making the assumption that it was made on special order, being unlike any other English case styles. In addition the illustration was chosen for the cover illustration of the Clocks Magazine of November 1987, which heralded the publication of the book.

The gothic-inspired case has been regilded in the recent past, presented here in excellent condition. The front and side panels are hand-chased gilt brass gothic fretwork backed with aquamarine enamelled panels, all remaining in pristine condition. The engraved top has a sunburst centre and a bi-fold handle that perfectly matches the ecclesiastical styling.

The diminutive 8-day twin chain fusee movement strikes the hours on a blued steel gong.  The original platform with plain balance and ratchet-tooth lever escapement has a diamond end stone, and is mounted horizontally on top of the movement. The corner-mounted balance cock allows it to sit sideways, necessitated by the miniaturised scale of the movement. The backplate is signed:

James McCabe (jnr.) was apprenticed to Reid and Auld, and gained admittance to the Clockmakers’ Company in 1822. Between 1826 and 1838, following the death of James McCabe Snr. and a partnership with Strahan, James McCabe operated from 97 Cornhill (Royal Exchange). The Exchange was destroyed by fire in 1838 and the business moved to 32 Cornhill. Thomas Cole was working for McCabe from 1825-43. The very high standard of decoration that one sees on Cole’s work can also be seen here.

The clock is currently working, but the movement will be overhauled prior to sale and guaranteed for 3 years.