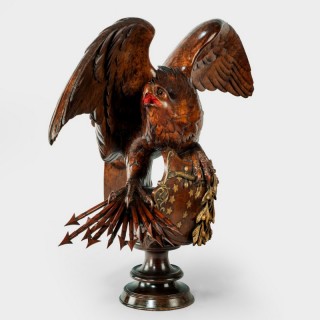 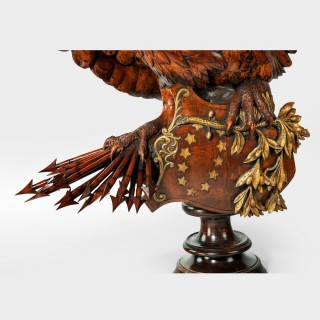 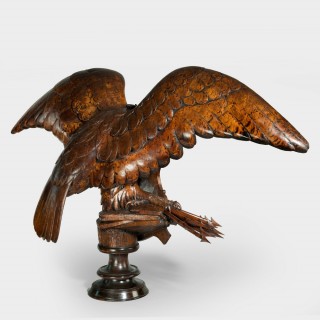 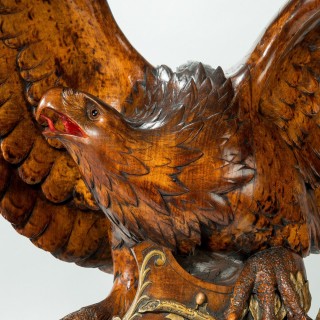 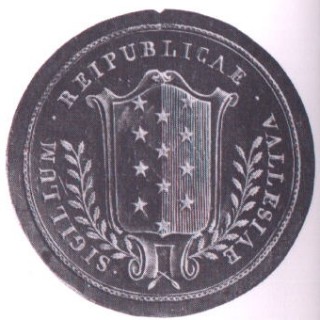 Monumental and Striking ‘Black Forest’ Walnut Carving of an Eagle

A monumental and striking ‘Black Forest’ walnut carving of an eagle perched on a toppled shield, E Binder, Shown with outstretched wings and the head turned to the right , the talons gripping a sheaf of arrows and a shield decorated in gilt with 12 stars partially obscured by a trailing laurel branch, the feathers realistically carved and scorched, the gaping mouth painted red, all raised on a turned socle.

As can be seen from the image above, the escutcheon shape of the shield is also echoed in our piece and surely the laurels draped across it are an attempt to represent a configuration such as that shown in the image but with the shield at a very different angle.

If the arms are indeed for Valais, it is possible that the eagle was made for an institutional building dating back to the Napoleonic period-perhaps as a replacement for an earlier carving. This is an intriguing mystery but whatever the reason for the piece’s construction, its quality and decorative appeal are immediately apparent. It is a remarkably fine example of Black Forest carving.

Monumental and Striking ‘Black Forest’ Walnut Carving of an Eagle