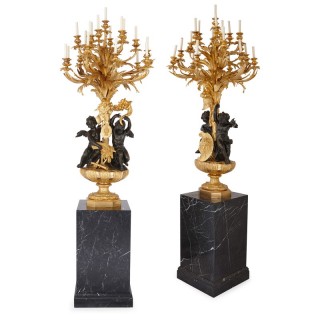 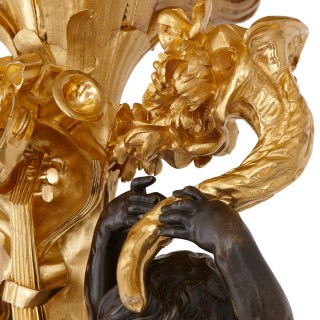 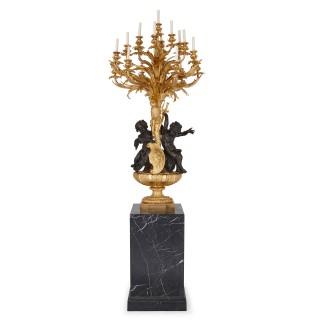 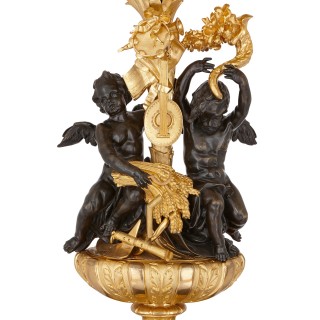 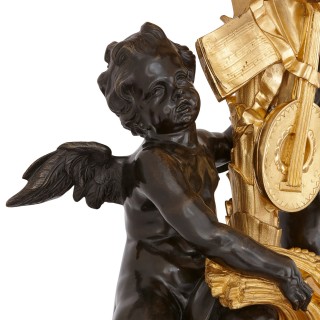 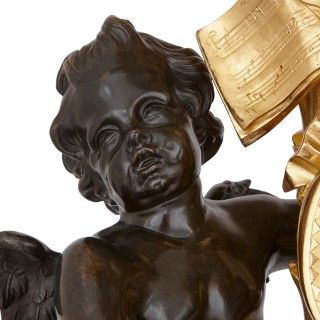 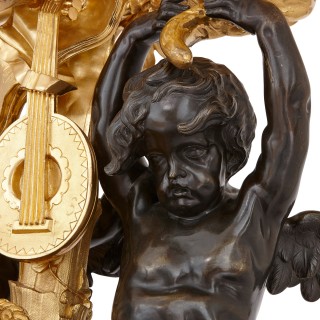 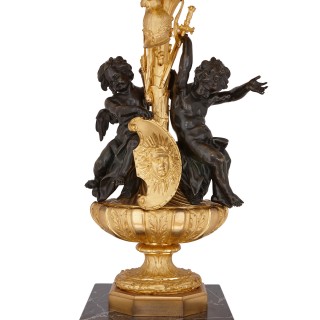 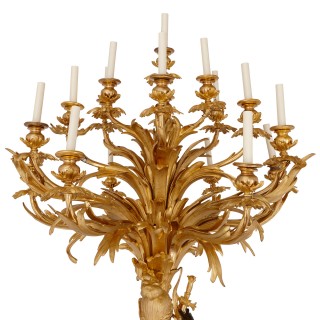 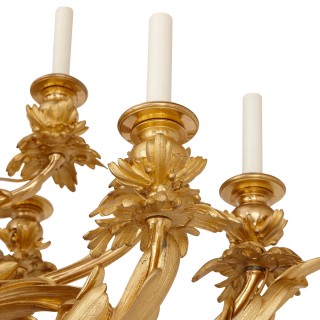 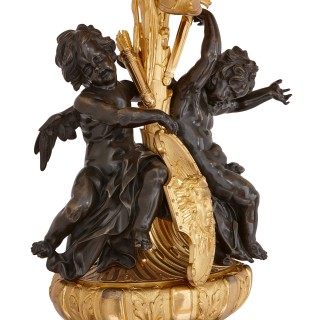 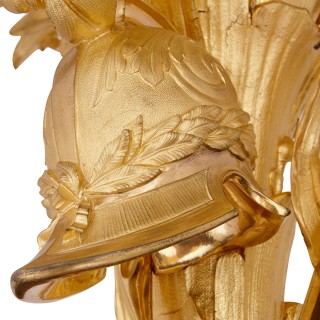 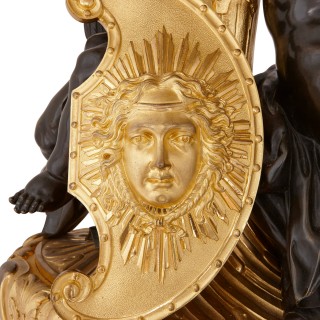 This opulent, monumental pair of candelabra by Beurdeley showcases the artistic and technical talent of one of the great cabinet maker families of the nineteenth century. These nineteen-light candelabra, mounted with two pairs of putti as allegories of war and peace, are an innovative creation influenced by, but not copied from, eighteenth century precedents. While the striking contrast between the patinated bronze and the gilding coupled with the magnificent scale suggest a highly important or royal commission, there is no recorded patron. Beurdeley was evoking the opulence of the Sun King and Versailles through the size, materials, and quality of the candelabra, but from a 19th century point of view. Beurdeley’s patrons included wealthy American robber-baron families, such as the Vanderbilts and the Rothschilds as well as a mix of European royalty, including the Empress Eugenie.

Specifically, Beurdeley was closely involved with the wealthy American families of the Gilded Age. He worked on multiple Vanderbilt estates, including The Breakers in Newport, and exhibited at the World’s Fair in Chicago in 1893. These candelabra are thus inspired by the Sun King and the style of Versailles yet are created for a 19th century audience, possibly a specifically American audience who furnished their homes in a lavish eighteenth century style.

This pair was documented and photographed in Beurdeley’s studio; captioned with the handwritten inscription: ’Guerre et Paix/ les enfants sont en bronze le reste dore/ 19 lumieres (…)’ (War and Peace/ the putti are in bronze the rest gilded/ 19 lights). A size of 1m70 is recorded. The photograph then appears to depict the pair currently for sale. After Beurdeley completed and documented this creation, it is unclear to where they next moved. A pair of candelabra described as ‘Grande torchere Renaissance, Enfants Paix et Guerre. Bouquet 18 lumieres. Partie et contre-patrie’ were offered as lot 1331 in an April 19-22, 1898 Paris sale titled ‘vente de modeles pour bronzes d’art, meubles de style et de grande decoration provenant de la maison A. Beurdeley’. Despite being described as having 18 rather than 19 branches, this description could indicate that the present pair was sold in this sale.

The candelabra are next documented at the Fox Theater in San Francisco. Eve Leo Fox, the wife of William Fox, the founder of Fox Film Corporation, purchased the candelabra in Paris in 1928, a year before the San Francisco Fox Theater opened. As Fox Theaters were built throughout many major American cities, Eve went on buying trips throughout Europe in order to purchase the furnishings and decorations for her husband’s ‘movie palaces’, which were acclaimed for their ability to seat up to 5,000 people. Unfortunately, the theater was demolished in 1963 and was accompanied by a sale of its contents. Following the sale, the candelabra entered the collection of the California Historical Society which subsequently sold them at Bonhams San Francisco, October 31, 2011-November 1, 2011, lot 1266.

The Beurdeley family was one of the esteemed dynasties of French furniture makers and dealers. The firm began in 1807 with the career of Jean Beurdeley (1772-1853). Jean was succeeded by his son Louis-Auguste Alfred Beurdeley (1808-1882) in 1837, who then passed it off to his son, Emmanuel-Alfred (1847-1919) in 1875. The firm was established at 32 Rue Louis-Le-Grand, and owned pavillion de Hanovre, where the firm was based while Alfred-Emmanuel-Louis added two additional workshops at 20 and 24 Rue Dautancourt. The Beurdeley firm was one of the few not still located near le faubourg Saint-Antoine, or the heart of the 18th century furniture industry. They were unique in their ability to venture into the le quartier de l’Opéra due to their financial position, which was buttressed by money inherited by Jean and Alfred’s marriage in 1852 to Constance Virginie Fleytas, a wealthy widow from New Orleans. In 1895, the company’s workshops closed and Beurdeley’s stock was sold at several auctions conducted by the Galerie Georges Petit of Paris.