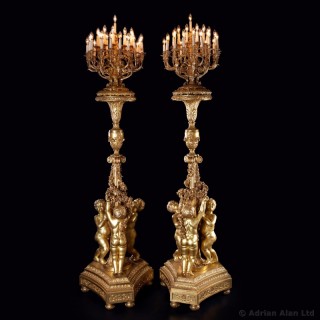 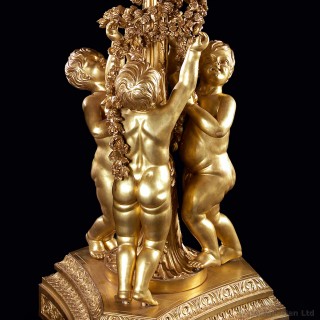 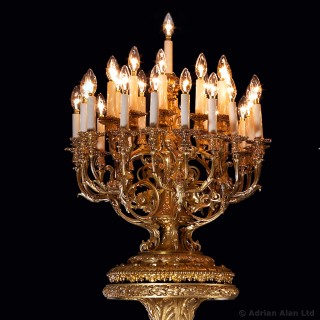 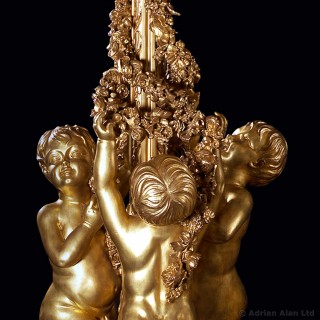 An Important Pair of Monumental Thirty-One Light Giltwood Torchères After the Model By Jacques Gondoin For the Hall of Mirrors At the Palace of Versailles.

Each torchère has a concave sided base with three carved putti figures supporting a central stem carved with a vase and floral garlands. Each torchère supports a gilt-bronze thirty-one light candelabra with a vase shaped stem with scrolling branches and foliate drip trays.

The torchères are carved after the celebrated models designed by Jacques Gondoin (1737-1818) architect and designer at the Garde-Meuble, for the Hall of Mirrors at the Palace of Versailles in 1769. The original models were turned by Derny (active in 1769) and carved by Foliot Toussaint (1715-1798),

Jacques Gondoin rose from the son of a Gardener to become one of the leading Neo-classical architects and furniture designers to the king. After studying architecture, he won third place in the Prix de Rome in 1759. In Rome he met many prominent designers and artists such as Giovanni Battista Piranesi, who greatly influenced his later work.

Upon Gondoin’s return to Paris, the King, at the suggestion of his surgeon, commissioned him to design the École de Chirurgie (School of Surgery), one of the great Parisian monuments of Neo-classical architecture. In 1769 the king appointed him dessinateur du mobilier de la couronne (Furniture Designer to the Crown), a post he held for fifteen years.

after the model by jacques gondoin