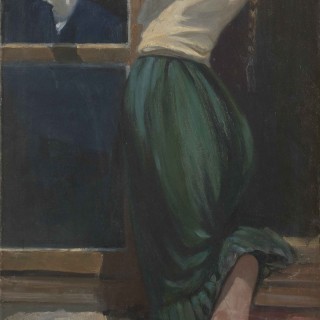 This is a wonderful image, a hangover from the era of Victorian genre paintings but a very modern painting for 1889. More of a transitional style, it could easily have been painted in the early twentieth century. The pose of the model is very natural, seemingly unposed in fact. The unconscious way in which she goes about her chores is beguiling, and the light is masterly. Even more impressive that Rönquist painted this while still a student of twenty five at the Swedish Royal Academy. Rather disappointingly a brief trawl through the net shows that her later output regressed into rather turgid conformity. Although commercially successful she didn’t fulfil the promise of this absolute gem, dying tragically of pneumonia at only 48.

Born in Uddevalla, the daughter of the physician Hugo Fabian Rönquist. She studied at Stockholm’s Technical College from 1880 to 1884 and subsequently at the Swedish Royal Academy from 1884 to 1890. After graduation she spent a further five years studying, first in France then Italy. On returning to Stockholm, she painted some of her best works in the 1890s. She was commissioned to produce decorative paintings for Stockholm’s Grand Hotel, Tjolöholm Castle and Steninge Palace as well as an altarpiece for Gudmundrå Church in Kramfors Municipality. She also designed a tapestry cartoon for the Friends of Handicraft as a gift for Queen Viktoria from Sveriges Landshövdingsfruar (or wives of Sweden’s provincial governors).

Sadly she died of pneumonia at the height of her career aged only forty eight. A commemorative exhibition of her work was held in Stockholm the same year.